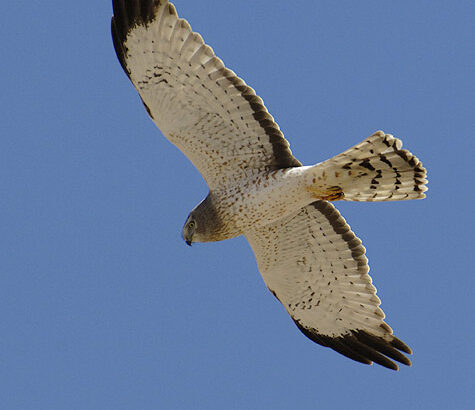 Visiting the Barr Lake banding station operated by the Bird Conservancy of the Rockies is always a special treat.  This fall they’ve been limiting group size to just six people, but we managed to book two back-to-back hour-long sessions, so we were able to get two groups of six out there, and it was well worth it.  While one group was visiting the banding station, and getting the benefit of Meredith McBurney’s expertise, the other group took a stroll with me to see what we could find, and then after an hour we switched the groups around.  The Conservancy has been banding birds at Chatfield in the spring and at Barr Lake in the fall for almost thirty years, and Meredith has played a major role in that endeavor.  She is not only accomplished at what she does, but she has a multitude of interesting facts and stories to relate.

These two banding stations at Chatfield and Barr have been located in places where migratory birds tend to congregate.  Using mist nets, birds are harmlessly trapped, they’re removed from the nets, data is collected on them, a small, numbered band is placed on a leg, and then they’re released.  Each of these bands has a unique number on it so that if the bird is recaptured somewhere else we can know where and when it was banded, thus learning a bit about the timing and route of that species’ migration.  Here’s a link to a video of Meredith banding birds in the spring of 2011 at Chatfield –https://www.youtube.com/watch?v=aTXpVL_XjD4.

Highlights at the banding station on Saturday included in-the-hand looks at such tough-to-see birds as Ruby-crowned Kinglet, Hermit Thrush, Lincoln’s Sparrow, and Wilson’s Warbler, while those of us out strolling along the canal were able to get great looks at a male Northern Harrier, Rock Wren, Chipping Sparrow, and Spotted Towhee.  Both groups got lots of looks at Dark-eyed Juncos and White-crowned Sparrows.

Let’s talk a bit more about the Juncos because the birds we saw at Barr were definitely not the same birds we might have seen this past summer up in the mountains.  Here in North America we have seven subspecies of Dark-eyed Junco that have different plumages (there are actually about fifteen, but sticking to seven suits our purposes just fine).  One, the Gray-headed Junco, breeds in our mountains each summer.  They, then, stick around through the winter, and the other six subspecies, which have bred farther north come down to also spend the winters here, and these have just started to arrive in the last couple of weeks.  The two subspecies we saw on Saturday were the Oregon and the Pink-sided.  If you look in your field guide, you’ll note how the Oregon Junco, regardless of whether it’s a male or female does not have black lores (the area between the eye and the bill), while the Pink-sided Junco does have black lores.  This is a really key characteristic because the duller colored individuals of both subspecies can otherwise look quite similar, often confounding even the best birders.

Hope to see you on another walk soon!