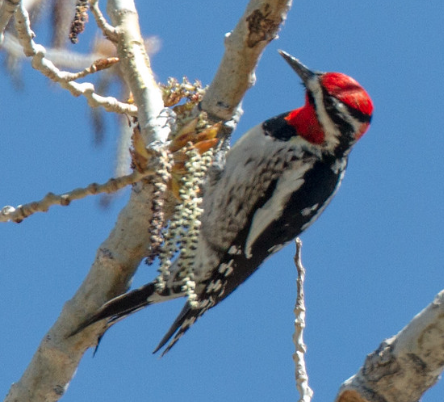 We led our first Front Range Birding Company bird walk to Beaver Ranch just a year ago at this same time. Somehow it seems much longer ago given the strangeness of the intervening twelve months.  The ranch is located just off US 285 a bit southwest of Conifer and is operated and managed by a local non-profit in agreement with Jeffco Open Space.  It provides cabin rentals, camping sites, a disc golf course, multiple ziplines, a dog park, and occasional weddings are held there.  So, it can potentially be a bit of a zoo on a summer Saturday morning, and that was certainly the case this time around.  I can’t quite decide if the number of good birds that we see there is worth inserting ourselves into quite so much chaos.

However, we did see a number of fun birds.  As with last year, we saw a several Turkey Vultures, as there appears to be a roost just southeast of the ranch.  In Colorado Turkey Vultures nest primarily in crevasses in cliffs, and the young tend to fledge around the first of August.  At that time, they join other Turkey Vultures at a communal nighttime roost in an area of sheltered forest, and then may forage separately during the day returning to the roost each evening.  We also were treated to the loud, persistent, begging, squeal of a juvenile Red-tailed Hawk. Later two adults were seen soaring together in the same area.

We were thrilled to get numerous looks at both male and female Western Tanagers, as well as seeing one probable juvenile who essentially had female-like plumage, but just sat in one spot for awhile looking fluffy and doofy.  The male, of course, is one of our most beautiful birds here in Colorado with its strikingly bright yellow underparts, nape, and rump, coupled with its black back, tail, and wings having one yellow wing-bar and one white wing-bar.  And, then to top it all off, it has a largely reddish head which can vary from deep scarlet to light orange.  First-year males may only get a bit of this red coloration, but by the second year, and if their diet is rich in carotenoids, it can be breath-taking.

Perhaps the highlight of the day was the variety of Williamson’s and Red-naped Sapsuckers we saw – males, females, and juveniles.  This seems to be a Beaver Ranch specialty, and we were lucky enough to pretty much get the full show.  There are four species of sapsuckers in North America, and the two we saw are the primary ones to be found in Colorado, though the Yellow-bellied Sapsucker can be a rare fall migrant and winter resident out on the eastern plains. The fourth species, the Red-breasted Sapsucker is mostly confined to the Pacific Coast of North America from Baja California to southeast Alaska.  One of the interesting features of all of these guys except for the female Williamson’s is that they have bright white wing coverts which on a perched bird appear as a long white vertical wing-bars and on a bird in flight show up as large white wing patches.  They all have large white rumps.  There’s an interesting story associated with the female Williamson’s which in the early 1850’s was originally described as a separate species due to its distinctively different plumage from the male.  It was known variously as the Black-breasted, Brown-headed, or Cooper’s Round-headed Woodpecker, and it wasn’t until 1873 that things got properly sorted out when a nesting pair was observed in Colorado.

One final cool observation was that we got to document breeding success for ten different species.  That is, we observed many juvenile birds, some of them begging, and even saw a few of them getting fed by mom and pop.

One thought to “Beaver Ranch, August 1- with Chuck Aid”