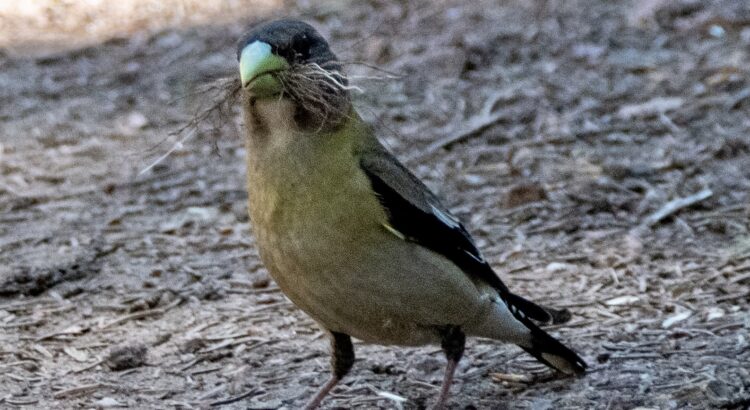 As Saturday’s participants will attest Beaver Ranch, which is operated and managed by a local non-profit in agreement with Jeffco Open Space, is an “interesting” place.  It provides cabin rentals, camping sites, a disc golf course, and multiple ziplines, and occasionally weddings are held there.  So, on a summer Saturday morning it’s pretty much guaranteed to be a bit of a zoo.  However, if you get there early enough and know which paths to take, it has a nice diversity of habitats and birds.

For starters, Casto Creek which runs through the north side of the ranch transects a wide, open mountain meadow with occasional huge ponderosas along one side and dense stands of spruce, Douglas-fir, and aspen on the opposite side.  Then, it has a wide swathe of tall willows running the whole way along the creek.  The height and extensiveness of these willows is part of what makes Beaver Ranch exceptional with regard to the birds that can be seen there.  For starters we saw a Wilson’s Warbler and a Lincoln Sparrow.  These are the probably the two most common breeding passerines (songbirds) in willow shrublands of the montane, subalpine, and alpine ecosystems.  Also in the willows were a Song Sparrow and a singing Black-headed Grosbeak – one of Colorado’s premier vocalists.  Meanwhile, out in the meadow a pair of Tree Swallows were feeding their young at a bird box, and a Red-tailed Hawk, Say’s Phoebe and Barn Swallow were in the vicinity.  Later in this same area we were treated to great looks of a Cooper’s Hawk flying just over our heads.

Leaving Casto Creek we followed a small tributary, not much more than a foot wide, into a narrow valley dominated in the bottom by huge blue spruce, with Douglas-fir on the north-facing slope and ponderosas on the south-facing slope.  A major feature was the occasional patches of mature aspen, which can provide groceries and condo-style living for a wonderful variety of birds.  Here we had nesting Violet-green Swallows and Northern Flickers bringing food into their cavity nests – the flickers being in a cavity that showed attempted depredation by a black bear with claw marks and bark torn away around the hole.  It was here that we also got fantastic looks at both Williamson’s and Red-naped Sapsuckers.  Finally, we had a pair of Evening Grosbeaks doing some nest building – views of these birds were world-class.  Throughout our time in this little valley we were treated to the ongoing calling of Cordilleran Flycatchers and singing of House Wrens and Ruby-crowned Kinglets, and, YES, we did get to see the ruby crown.

What a glorious morning!

View this checklist online at https://ebird.org/checklist/S89666116