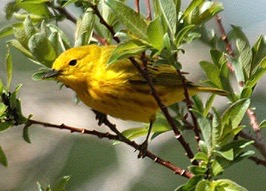 Fourteen of us had a rather slow morning at Chatfield.  There were periods of almost total silence with regard to the avian community. However, we persisted, and managed to get a reasonable number of species even though the total number of individuals was quite low.

So, what did we not see?  We whiffed on Canada Geese, grebes, doves/pigeons, shorebirds (except for one Killdeer), gulls, herons, owls, woodpeckers (except for one Downy), vireos, and blackbirds/meadowlarks/orioles.

What we did manage to see included three species of flycatchers: Western Wood-Pewee, Say’s Phoebe, and Western Kingbird.  We also had a few Gray Catbirds, Cedar Waxwings, and Lesser Goldfinches.  And, we had great looks at a couple of Yellow Warblers, a single Wilson’s Warbler, and a couple of Western Tanagers.  Fall migration is really the only time of year that we get to see Wilson’s Warblers in the Denver area, as their spring migration route is farther west and they breed high in the mountains.

The real highlight of the day may have been the raptors we recorded, though most of them were at quite a distance from us.  An Osprey gave us a fleeting view as it flew up the river.  We got to see Golden Eagles, Swainson’s Hawks, and a single Red-tail soaring; and we had an American Kestrel perched on a pole.  A few of us had a closer look at the two Golden Eagles as we drove back to the Front Range Birding Company.  They were on the ground tearing apart what was presumably a prairie dog and surrounded by Black-billed Magpies.  One was obviously a juvenile with the beautiful white “windows” in the wings and the white tail feathers with a broad, black, terminal band.  The other, which the whole group of us had observed while perched on a power pole, was a probable adult with the upperwing coverts paler than the rest of the dark brown feathers and forming a tawny diagonal bar.  This can be seen both on perched birds and those in flight.

Hope that you get out with us on another walk soon!!