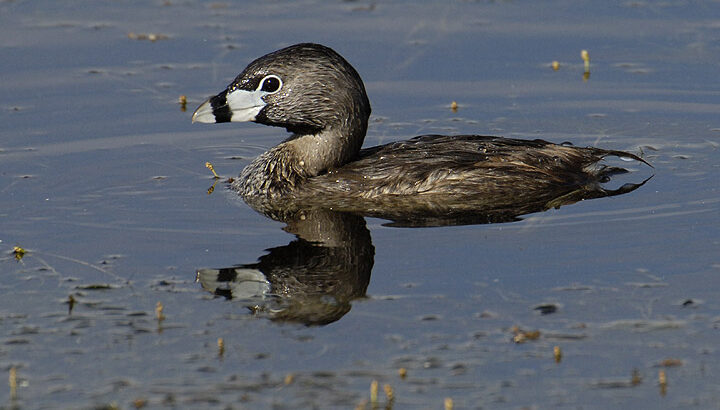 It’s about a two-mile hike around Harriman Lake on a nice wide path.  The size of the lake is small enough that it’s possible to scan it with binoculars and be able to pick out most of the waterfowl, thus, for the most part, negating the need for a spotting scope.  Of course, a scope is a pretty nice accoutrement if you’re really wanting a great view of all the tiny details of a bird.  Back in November when we were here the lake was as low as I’ve ever seen it with extensive mudflats.  Now, five months later, it’s back to being full.  Nice to have this brief respite from our horrific drought conditions.  Hopefully, April and May will continue to bring a bit more moisture.  One final note on the lake itself.  For some reason it tends to always have a pretty good variety of waterfowl when other reservoirs in the area may not, so because of the generally good variety of birds and the size of the lake permitting fairly good views, I highly recommend it for our beginning birders.

The above being said, we did not have a great variety of waterfowl this past Saturday.  Some of our wintering ducks have apparently already begun to wend their way northwards, and throughout the area we seem to be seeing less of many of them.  In mid-winter we can commonly see 10-15 species of waterfowl at Harriman.  On Saturday we had 9 species, so a bit below what we tend to expect.  We did have a great view of three American Coots standing on a log.  While Coots superficially can look like ducks they are in a completely separate order, the Gruiformes.  Quick digression.  It is helpful to pay a bit of attention to the taxonomy associated with birds, though this may be a bit more scientific than some of you want.  Bear with me, and I’ll try and be brief.  As we scroll down through the taxonomic levels, we see that birds are in the Kingdom Animalia, the Phylum Chordata (have a spinal cord), Subphyllum Vertebrata (have a backbone), and the Class Aves (all birds). Then within the Class Aves the next level is the Orders (there are about forty of them) that differentiate between the major groups of birds – Ostriches, Penguins, Hawks, etc.  The fact that ducks are in the order Anseriformes, grebes are in the order Podicipediformes, and coots are in the order Gruiformes tells us right away that we’re looking at some critters that even though they may appear sort of similar in some ways have very different origins in their evolutionary history.  So back to our American Coots standing on the log.  This was cool for us because we got to see, when we looked closely, that not only do coots not have a spatulate-like bill which ducks have, but they don’t have webbed feet either – they have extremely long, lobed toes.  They can do a bit of walking, but they’re not really equipped for a long hike.

Perhaps the real highlight of the waterbirds was a beautiful male Ruddy Duck in breeding plumage.  Newly arrived migrants included Mourning Doves, Double-crested Cormorants, Say’s Phoebes, and Common Grackles.  We also saw more Song Sparrows than were around a month or so back, so some of them are likely new arrivals.  We had plentiful singing from these Song Sparrows, as we also did from some cooperative Western Meadowlarks, and that was a great treat. Finally, thanks to our sharp-eyed fifth grader, Anna Panaka, we got to see a high-flying Cooper’s Hawk heading north. These guys, which are one of our three accipiter species, are long-tailed hawks that get their groceries by flying fast and low through trees and bushes and don’t often fly very high – except in migration.  So, not a for-sure migrant, but a likely one.

Hope to see you next month!