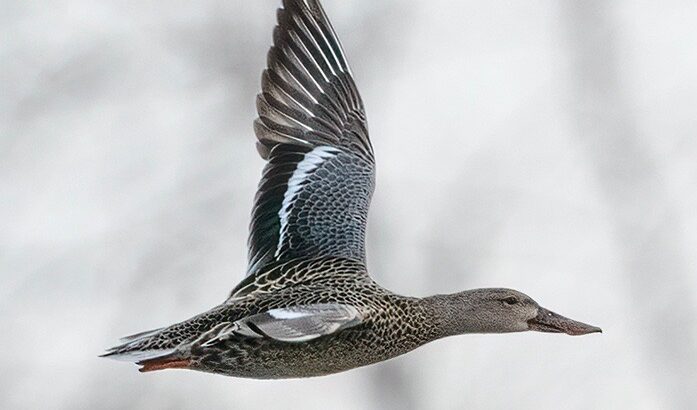 The size of Harriman Lake continues to be as small as any of us on Saturday have ever seen it.  Evidently, the last time it was this low was back around 2011-2012 when Denver Water drained the entire lake to do maintenance on the dam.  We did notice on Saturday that water was being brought in from the nearby Bowles Lateral Canal, aka Harriman Canal.  So, it looks as though they intend to not let it go completely dry, and as a result we saw a number of waterfowl – geese, ducks, grebes, and coots.

Among of the most obvious birds were the geese, but which species were we seeing?  Canada and Cackling Geese look very similar, and, while we only have Canada Geese during the summer, we have both species here in the winter. Part of the identification problem lies in the fact that there are at least eleven subspecies of Canada Geese and four of Cackling Geese ranging in size from just slightly bigger than a Mallard to behemoths with a five-foot wingspan.  I noticed some traits of both species on Saturday, but did not take the time to really try and figure out what we had and therefore they got entered on our list as Cackling/Canada Geese.

A few duck notes….  While all of the male Mallards appear to have lost their cryptic eclipse plumage and regained their elaborate breeding plumage, the Northern Shoveler males seem to be lagging behind and still look slightly disheveled – don’t quite have their bright, clean breeding plumage yet.  It was great to see so many American Wigeon, and some of us worked on trying to imitate the high, squeaky, rubber-ducky call of the male.  Overall, about 95% of our ducks were “dabblers,” and we just had a few “diving” ducks – Redhead, Bufflehead, and Hooded Merganser.  This may be due to the lake being so shallow these days.  We noticed some apparent male-female “couples” among the ducks; many are seasonally monogamous for up to eight months – picking a different mate the following year.

As for highlights we got to watch a male American Kestrel diving repeatedly at a Red-tailed Hawk encouraging it to move out of the neighborhood.  And, then, we got great looks at a large group of American Tree Swallows moving through some low shrubs.  These handsome sparrows start arriving in mid-October, they spend the winter here and, then, they’ll be starting to head north in March and early April.  Their name is somewhat of a misnomer, given by early North American settlers who saw that the birds resembled the European Tree Sparrow.  Our birds actually breed north of the arctic tree line.  While many of our sparrows have steaky breasts, Tree Sparrows have a clear, light-gray breast and belly with a dark central spot and a rufous patch on their side.  They have a gray head and nape with a rufous crown and eye-line.  The back and scapulars (shoulders) are streaked black and rufous which provides a nice contrast with the bold white wing-bars.  Finally, they have a bi-colored bill with a dark upper mandible and a dusky-yellow lower mandible.