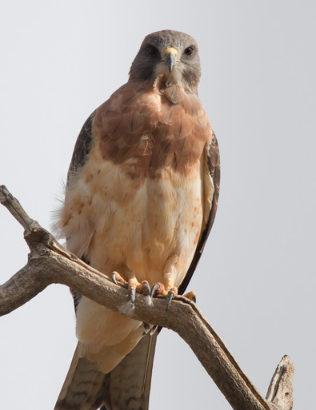 We have come to recognize that during the summer, when it comes to ducks in the Denver area, the story is pretty much Mallards and more Mallards, and we count ourselves lucky when we stumble across something else.  And, then during the latter part of the summer,  male ducks go through about a 1-2 month period where they acquire a cryptic coloration known as eclipse plumage.  During this time, when they look very similar to their female counterparts, they are flightless, so a touch of camouflage is not amiss.  On Saturday we noted that the only way to easily tell male Mallards from the females was by the color of their bills – males being yellow or greenish-yellow while the females are orange with a black smudge on top.  I’m pretty familiar with these guys.

However, I am less familiar with what some of the eclipse males look like for our less-common ducks, and while on our walk a few of us got to see an American Wigeon in eclipse plumage. A male American Wigeon in breeding plumage is a beautiful fellow with a cream (almost white) colored crown and forehead.  It has a wide iridescent green swoop running from the eye down the nape; the cheek and throat are creamy-white with little black spots; the bill is a light bluish-gray; the undertail coverts are black; the belly is white; and the breast, flanks, and back are a wonderful warm pinkish-brown.  In contrast, during eclipse plumage, all of the head is creamy-white with little black spots, the black tail disappears, and the majority of the bird is a rich chestnut brown.  One of the participants on Saturday mentioned that it looked red.  And finally, as with the male Mallard, its bill retains the same color that it previously had – a light bluish gray.

Sticking with the ducks, we had one other neat observation – a group of what appeared to be six juvenile Wood Ducks, four females and two males (bright white “bridle”).  I say “appeared to be” because the females all had the white teardrop surrounding the eye that is characteristic of adult females. However, because they apparently lacked the pale spotted flanks of an adult and were all together in conjunction with two juvenile males, I concluded that they had probably just recently acquired their white teardrops.  We are right at that time of year for that transition to be happening.  Now, as for the two males you may be asking, “How do we know that they’re not adults in eclipse plumage?”  The answer once again lies with the color of the bill.  In an adult there is a small patch of yellow at the base of the bill with a larger patch of scarlet in front of that which grades into white, ending with a distinct black nail at the tip of the bill.  Our guys lacked this bright coloration, having gray bills, therefore they were juveniles.

A few other highlights included an adult Swainson’s Hawk, a couple of migrating Wilson’s Warblers – down out of the mountains and on their way south, and a slew of Cedar Waxwings hawking insects out over the river.