Fifteen of us had a great outing at Hudson Gardens this past Saturday. The weather was not too hot and we recorded 35 species of birds (see list below).

Things were hopping from the outset. Before I could even introduce myself we had a juvenile Cooper’s Hawk calling from a nearby tree, and a female Wood Duck with five youngsters in tow right below the Cooper’s.

Another highlight as the morning progressed included either a single American White Pelican cruising by periodically, or a few different individuals doing the same. We also had great looks at the “golden slippers” of a very cooperative Snowy Egret. Photo from http://www.bioexpedition.com

We saw four species of swallows, including nesting Tree Swallows in a box at the south end of the wetland area. I was surprised to not see more Cliff Swallows as in the past they have nested in large numbers (100+) under the Bowles Ave. bridge over the South Platte. I guess their young have already fledged and moved on, but it seems a bit early to me.

Perhaps the most interesting observation was of a pair of Red-tailed Hawks that were hanging out side-by-side for much of the morning. One was a typical light-morph western Red-tail – the one we see the most frequently, but the other one was a darker intermediate-morph with a gorgeous, rich rufous (rusty red-brown) breast – photo courtesy of Bill Schmoker.

Finally, the last bird of the morning was the most colorful – a male Bullock’s Oriole. 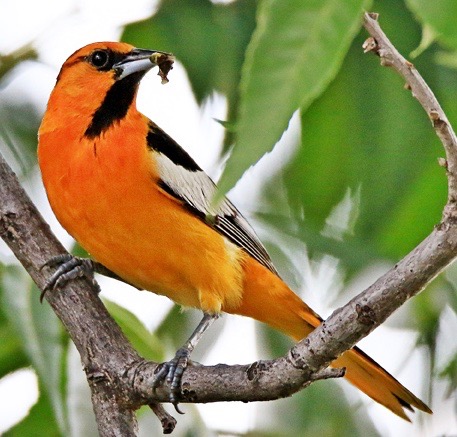 It was a wonderful morning! Hope to see you soon on another Front Range Birding Company outing.