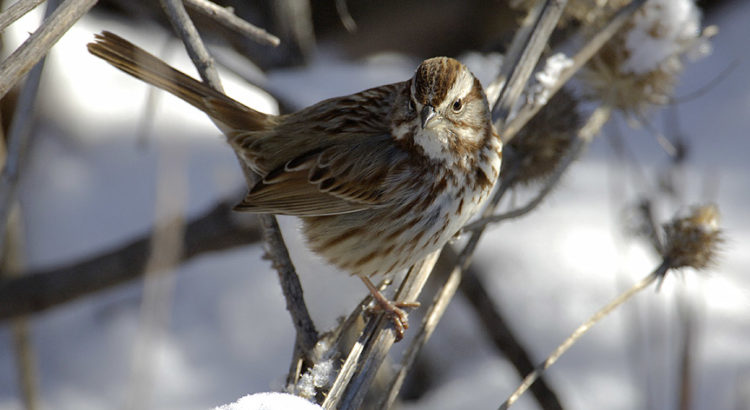 The weather forecast for Saturday said it should get up to about 62 degrees.  It may have eventually gotten that warm, but it was far from it at 8 AM. Fortunately, we had a fair amount of bird activity to help keep us warm.  We began by checking out the pond immediately behind the Welcome Center, and were rewarded by a pair of Gadwall, a few Mallards and Canada Geese, and four male Green-winged Teal.  Then, in the next pond over we could see a couple of male Northern Shovelers.  This brings me to an interesting aspect of our morning.  We ended up seeing nine species of ducks, six of these were heavily dominated by males. We saw no female Shovelers or Green-winged Teal, 90% of our Mallards were males, and all of our Lesser Scaup, Common Goldeneyes, and Hooded Mergansers were males.  The only species with a semblance of balance were the Gadwall, American Wigeon, and Bufflehead.  Not sure where the girls were but given the rough treatment one female Mallard was receiving, we can imagine that for good reason many of them were not ready to hang out with the boys.

There was also a single American Coot on the river which has a superficial resemblance to the ducks, but rather than having webbed feet, it has long lobed toes and a stout, conical bill.

We had one mystery raptor flying low and fast behind some trees.  At the time I identified it as a Prairie Falcon, but upon further thought I think it was probably a Cooper’s Hawk.  Both of these birds have long tails and fly powerfully with shallow, stiff, wingbeats; however, the Prairie Falcon flaps more consistently, and the Cooper’s Hawk has a flap-flap-flap-glide pattern.  While I did not get a great look at our bird and even thought that it might have had the pointed wings of a falcon, I did see this classic Cooper’s Hawk flight pattern, and base my final identification largely on that.

Perhaps the highlight of the morning was the woodpeckers.  We ended up with six Downy Woodpeckers, getting great looks at almost all of them, and then we had a pair of Hairy Woodpeckers.  These last are primarily resident in the foothills and mountains and only rarely make it out onto the eastern plains or into urban areas.  So, it is rare to see one in the city, and even more rare to see a male and female together, and even exhibiting some obvious pair-bonding.