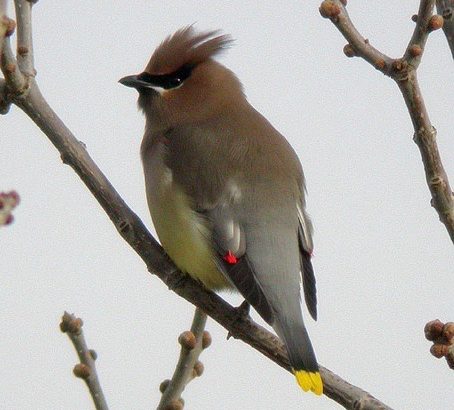 We had a beautiful morning at Hudson Gardens, and managed to see a variety of fun stuff.  For starters we had two groups of juvenile Wood Ducks for a total of six females and one male.  The juvenile male can be distinguished from the females by his bright white “bridle,” a feature that persists on the males into adulthood. Adult males, of course, are among the most colorful birds in North America but we, unfortunately, saw no adults. On the other hand, we did see a slew of adult male Mallards, all of which were in eclipse plumage, which occurs at this time of year when the males acquire the same camouflage as the females and can only be distinguished by their yellow bill (female bills are orange and black).  This is a nice adaptation for the males because they can actually become flightless for a few weeks and to be less visible is a nice protective strategy.  The deal is that while most birds replace old feathers with new ones a few at a time, ducks shed all of their outer feathers when they molt, including their wing feathers.  Part of the “reason” behind all this is that ducks prepare for the coming breeding season much earlier than most other birds and have all of their bright colors again in the fall in time for the onset of the ducky dating season.  As I mentioned during the walk, winter birding can be a fun time for newbie birders because the ducks are easy to see and have their breeding plumage.  Also, we have a far greater variety of ducks in the winter – up to twenty species – than we do in the summer.

We also had a nice variety of other waterfowl, including Double-crested Cormorant, American White Pelican, Great Blue Heron, and Snowy Egret.  While the Snowy and Great Egret, which also occurs in Colorado, are superficially alike, the Snowy can be distinguished by its all black bill and “golden slippers.” Incidentally, for you more advanced birders, distinguishing between these two in flight can be a bit tricky, but the underneath belly and neck of the Snowy are in a flat plane while the neck of the Great Egret bulges downward.

A real bonus for the morning was getting to see four raptor species: a juvenile Red-tailed Hawk which could be identified as such by its multi-banded tail and its juvenile “squeal” calls, an Osprey, a Turkey Vulture (actually more closely related to storks than to the raptors, but because of their strong superficial resemblance to hawks and eagles they continue to be included as a raptor in our field guides), and a Prairie Falcon.  A bit more about this last bird – it could be initially identified as a falcon because of its pointed wings and long tail.  Much of the rest of the identification was based on behavior.  It flew with continual strong, snappy, stiff-winged, shallow wing beats with no gliding, and was very fast and purposeful in its direct flight. This flight behavior and the bird’s apparent large size made it likely that our bird was a Prairie Falcon.  The light brown coloration in the back helped to confirm that it was not a similarly-sized Peregrine Falcon.

Finally, we had great looks at a number of Cedar Waxwings.  These guys are glorious, and we certainly appreciated the show.

Hope to see you on another walk soon!
Chuck