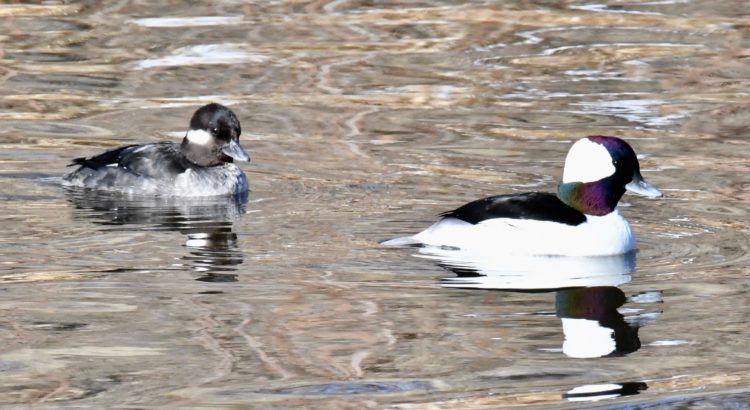 Saturday, what with cold, drizzling rain and gusting winds, was not necessarily a good day for fair-weather birders, and about half the folks registered for our bird walk were no-shows. Those who did show up, all women by the way, were totally psyched to be there, well prepared for the weather, and had a great time.

With Hudson Gardens being adjacent to the “Flat” Platte we always seem to get great views of the ducks on the river, and Saturday was no exception.  Everyone learned a lot about identifying the seven duck species that we saw, with some folks even starting to discern extremely fine points of identification all on their own – great observers!  I’m confident that in the future everyone will be far more self-assured in identifying both male and female Gadwalls – not one of the more colorful ducks, and the female is definitely a tricky ID even for moderately good birders.

One of our early highlights was getting good close views of a Great Blue Heron standing in a little streamside estuary and being aggressively challenged by a muskrat.  The muskrat kept circling around the Great Blue and to all appearances being quite brave in its attempt to drive the heron out of its home territory (we’ve seen baby muskrats in this same area on other outings).  Eventually the heron strolled off and the muskrat seemed mollified.  Great Blues are voracious carnivores.  They eat everything: fish, worms, aquatic insects, mollusks, crustaceans, amphibians, reptiles, birds (eggs, nestlings, ducklings, rails, bitterns, etc.), and mammals (mice, voles, chipmunks, squirrels, rabbits, muskrats, gophers, etc.).   Not surprisingly they have been known to choke to death on an overly large prey item.  Here’s a link to a video of a large fish being successfully swallowed whole – however, it’s not for the faint of heart – https://www.youtube.com/watch?v=1v5w0UK2SvE.  You can even find videos of Great Blues eating muskrats if you’re so inclined.

On a prior Hudson Gardens walk last breeding season we got to watch a similar standoff in which a Red-winged Blackbird was attempting to drive off a Great Blue from within a stand of cattails.  The heron would crouch down and then make dramatic leaps into the air unsuccessfully attempting to snag the Red-wing.  We left not knowing the outcome of that encounter.

One of the other highlights of the morning was the good diversity of birds seen at the bird feeders in the Bird Garden.  Besides the usual House Finches and Black-capped Chickadees, we got to see a White-breasted Nuthatch, a Song Sparrow, and several American Goldfinches.  These are all species that can be seen year-round in the Denver area.  Then, we also got to see some recently arrived migrants that will spend the winter here – a couple of American Tree Sparrows, and a nice variety of Dark-eyed Junco subspecies.

We have one subspecies of Junco that is in Colorado throughout the year – the Gray-headed.  However, there are an additional five subspecies that, having bred up in the boreal forest of Canada, the Pacific Northwest, and the Northern Rockies, come here to spend the winter.  We were fortunate to see four subspecies at the feeders.  A nice mix!

Hope to see you soon on another great Hudson Gardens outing!