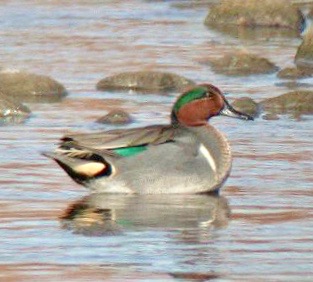 Well, I think we can safely say that the eclipse plumage time of the year (when males briefly have a female-type cryptic plumage) is over and that everybody is pretty much set with their fancied-up breeding plumage for next spring.  Also, our winter ducks are starting to really roll in (fly in) now. So, who did we see on Saturday? For starters we had a good number of Gadwall – the male with his black butt and puffy head, and both sexes with the white secondaries making a little white spot on the sides when not in flight.  There were also some great American Wigeons – the male with his white (or creamy) forehead, green swoosh through the eye, black butt, and big white hip patch; the female with her smeared mascara, and both with their warm coloring on their flanks. Mallards were looking glorious – the male with his green head, white collar, brown breast, and black curly tail; the female with her orange bill with a black blob on it; and both with their white tail feathers.  Next there were a few Green-winged Teal – the male with his cinnamon head, green eye swoosh and vertical white bar on his flanks; and both male and female showing some buffy, pale yellow in the tail.  Finally, we had three Hooded Mergansers – the male with his white crest bordered in black, the two vertical black stripes on his upper breast; the female with her frosty-brown punked-out crest; and both with their bright yellow eyes.

I urge you newbie birders to get out your field guides and note these characteristics that I’m pointing out, so next time you can tell me what we’re seeing.  And remember that we’ll be focusing a lot on waterfowl through the winter months because we get such a great variety here in the Denver area, including a whole slew of diving ducks, loons, and grebes.

One of our real treats on Saturday was the great look we had of a Belted Kingfisher.  We could tell it was a male, because it had the single dark gray breast-band and had no rufous coloring in the breast or flanks at all. It was noted that a good spotting scope really helps discern the finer points of these incredible birds with their shaggy crest and HUGE bill.

A real highlight was the good variety of songbirds that we managed to see, a great many of them at the Hudson Gardens feeders and in that vicinity.  I recommend spending some time there sitting on one of the benches and just seeing what might show up.  I think we had thirteen species there.  If you get the chance to see the little gray Bushtits note that the male has dark eyes and the female has yellow eyes.

See you on another walk soon!
Chuck