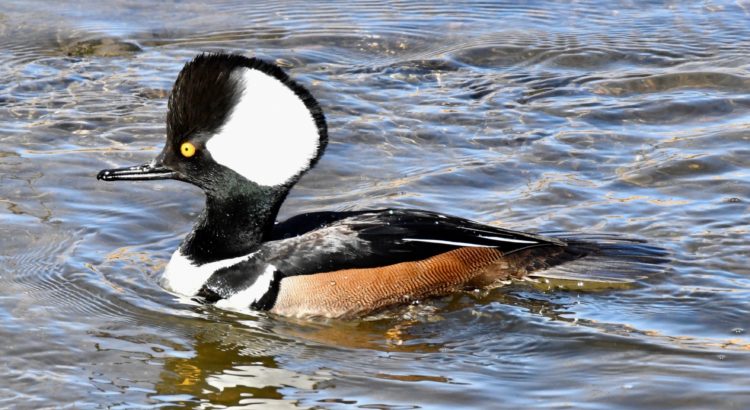 It was another great morning at Hudson Gardens.  We spent a fair amount of time working on the finer details of identifying five duck species. On Gadwalls the male has the big black rump and has silver tertials (the flight feathers closest to the body), and the female though relatively drab has white secondaries that when the wing is folded against the body cause a white spot to appear on her side.

With American Wigeons both male and female have a light bluish-gray bill and warm, brownish flanks; the male has an obvious whitish forehead and a distinct dark green swoop through the eye area; the female has her mascara smudged around her eye.

Mallards we know pretty well, but don’t forget the male’s curly black tail and clean yellow bill; the female has an orange bill with the black blobby spot on top; both have white outer tail feathers.  We only got to review male Buffleheads, as we saw no females, but we noted how white they were overall, with their relatively large round heads. For Hooded Mergansers we only got to see two males, but they were beauties, and unmistakable.

We had some great looks at a couple of Red-tails, and one flew just a few feet above us providing a nice close-up view of its underside.  The birds had some nice differences and similarities.  So, while one was more of our classic light morph western Red-tail, the other was a much lighter looking individual with almost no buffy coloration – just black streaking on white for the belly-band.

We had some good migrant activity with tons of American Goldfinches all over the place, and then right when we were leaving a large flock of Cedar Waxwings moved through. Also, had a couple of Dark-eyed Juncos.

Overall, we had numerous opportunities for really nailing down some of the finer points of bird identification, and we all came away gratified at how much smarter we had become in such a short while – deservedly self-congratulatory!