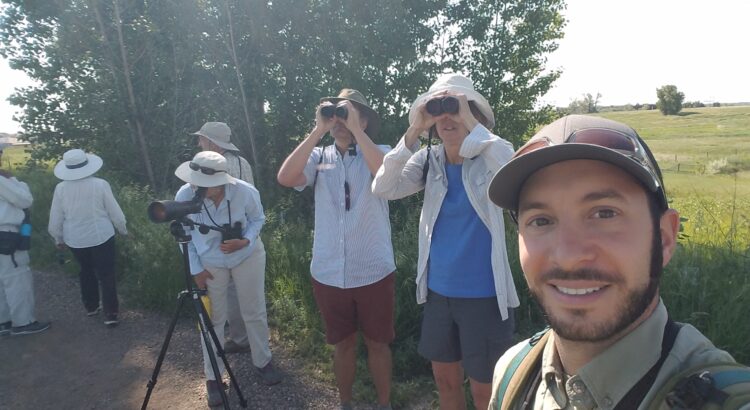 Grasslands are an iconic habitat of Colorado, although often overlooked since they lie in the shadow of the epic landscapes of Rocky Mountain National Park. However, grasslands and prairies account for a good percentage of Colorado natural areas. Sadly, in today’s day and age these crucial wildlife habitats are fragmented by roads and development, grazed by free-range cattle, and converted into farmland. Grassland birds happen to be one of the most imperiled groups of birds in the United States, having declined by around 40% since the 1960’s. Nevertheless, our native Colorado grassland birds seem to adapt well to the ever-changing landscapes, and Lagerman Agricultural Preserve provides rich habitat for an abundance of birds which is why we chose this location for the June 12th bird walk.

We had the largest group we’ve had in a while, after making a last-minute decision to allow the entire wait list to join. The first stretch of the Open Sky Loop is relatively uneventful, although we did get some nice views of western meadowlarks as well as a slow-motion Cooper’s Hawk flyover. There are little pockets of cottonwood trees and agricultural ditches along the trail, creating more diversity of habitat and we were lucky enough to find a Common Yellowthroat singing in one of the trees.

Further up the trail, by the ag pond, we stopped for a while and scoped out the surrounding area. Swainson’s Hawks and Red-tailed Hawks soared overhead, and both Eastern and Western Kingbirds chased insects from prominent fencepost perches. This provided an excellent opportunity to compare these species side-by-side, as well as generate some interesting discussion about bird behavior and adaptations. When Kingbirds catch insects in midair, this behavior is known as “hawking” and although it seems like a major acrobatic feat, to the bird it is as simple as opening the refrigerator door to us. This is because birds’ brains can interpret what they are seeing at a much higher-frame rate than we can, so they can react much quicker to the erratic flight pattern of an insect. We also enjoyed the thrill of watching one of the Kingbirds chasing other birds away from the area, and this territorial behavior is where they get their name.

Although our three target species (Bobolink, Dickcissel, and Blue Grosbeak) were nowhere to be found, we managed to get some soul-satisfying views of quite a few other species, including Cliff Swallows, American Goldfinch, and even a half-asleep roosting Great Horned Owl! Everyone got to view this majestic nocturnal raptor using the Novagrade phone adapter through the Zeiss Gavia spotting scope at 60x magnification. Other species of note were Osprey, American Kestrel, and Blue-winged Teal. For a hot day, and the trail being crowded with groups of bikers, I would say we didn’t do half bad.