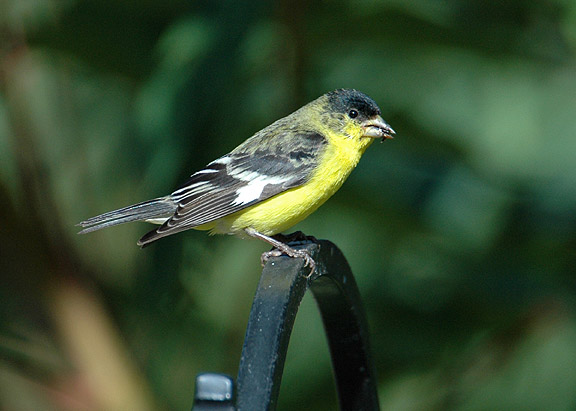 The paucity of birds this summer in the foothill and montane habitats continues, and with this past Saturday being perhaps the worst air quality day of the summer, the number of birds seemed to have declined even more.  Our group recorded only slightly more than seventy individual birds.  The list of those birds that seem likely at this time of year, but were not seen on Saturday, far exceeds what we did see.  For starters we tend to always see Mallards along the creek, hear the plaintive call of the Mourning Doves, and perhaps see a solitary Great Blue Heron gliding past and a few Turkey Vultures in the distance.  Nothing.  As for woodpeckers, we heard no Downy or Hairy Woodpeckers, and we had only one solitary Northern Flicker.  With regard to our migrant songbirds, normally, we still tend to see Cordilleran Flycatchers, various swallows, American Robins, Yellow Warblers, and other warblers until the end of August, but we whiffed on all of these.  And even among our resident birds such as the nuthatches, Black-capped and Mountain Chickadees, and Dark-eyed Juncos that are here year-round, we saw none.  We have already seen in recent years that North America has experienced a loss of about one-third of its birds since 1970.  That’s about THREE BILLION birds, but now this year the progression of that decline seems to have accelerated.  Reasons behind declines in bird populations include habitat loss, pesticide use, agricultural intensification, urbanization, declines in insects, and, of course, climate change.

Despite our low numbers we did have a few highlights.  For starters we got to have good long looks at numerous adult Cedar Waxwings that were busily engaged in sallying out from exposed dead branches after insects.  While we saw them engaged in this insectivory, these birds for much of the year are frugivorous (fruit eating), and as a result they tend to breed later in the breeding season when fruits are ripening.  We saw evidence of an abundant fruit crop at Lair O’ the Bear including wax currant, gooseberries, raspberry, and especially chokecherry, so the waxwings are likely to remain in that area for the next several weeks and a return to the park should provide an opportunity to see juvenile Cedar Waxwings.

One other rewarding sight was of two beautiful male Lazuli Buntings.  These have bright blue on the head, nape, back, wings, and rump; a cinnamon band extending across the upper breast and down the flanks; white underparts; and two bright white wing-bars.  There can be quite a bit of variation in the width of the cinnamon breast band that does not appear to be related to the age of the bird.  Finally, the bird of the day was the Lesser Goldfinch which was present everywhere and constantly calling.

Hopefully, as breeding season winds down and fall migration activity increases, we will see more birds in the coming months.