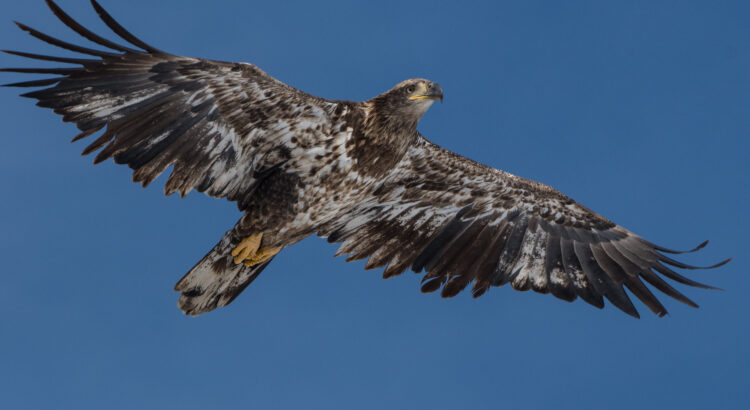 Milavec Reservoir in Frederick, Colorado is always a good place to see ducks and geese in the winter. I like to go at least once every year to see what I can see. This past Saturday was cold and windy and because of that a lot of the reservoir was frozen, but just enough remained open that it drew some interesting waterfowl and even some hungry raptors,

including 4 Bald Eagles and a Northern Harrier.

The other hybrid was a lot harder to pin down to parentage. The white, blotchy head points to either a Snow Goose or a Ross’s Goose parent with the blocky head shape being more of a Snow Goose than Ross’s Goose trait. The dark bill and dark body indicates the other parent was either a Cackling or a Canada Goose.

We also had some great diving ducks, including good looks at both male and female Canvasbacks. The “ski slope” head shape of the Canvasback is distinctive and makes it unique from our other duck species. The Canvasback is named for the male’s white body, which resembles the color of unpainted canvas. The highlight for me was the lone Red-breasted Merganser that helpfully hung out next to a male Common Merganser to give a good indication of its slightly smaller size. This merganser had dark patches on the face, which I suspect would’ve been green feathers coming in if we’d been able to get closer to it. Immature male Red-breasted Mergansers resemble females with their brown heads and grey bodies. Mature males have green heads.

If you get a chance, check out Milavec this winter. I doubt you’ll be disappointed whatever you end up seeing!