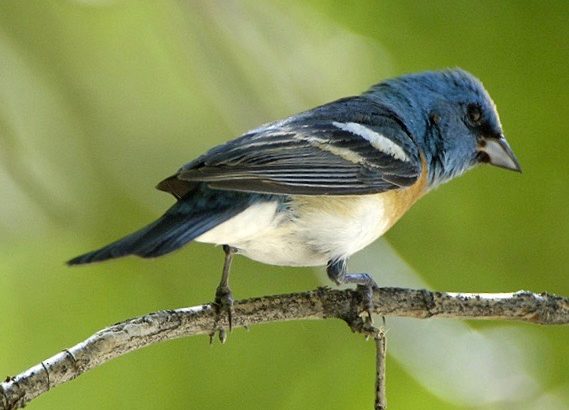 A spring morning at Roxborough is pretty hard to beat. The wild plums were all in bloom and subtly perfuming the air.  Many of the early flowers were out: Sand Lily, Mertensia (Bluebells), Larkspur, Golden Banner, Spring Beauty, Oregon Grape, etc.  And, there were the usual resident birds mixing with the newly arrived migrants.

Of course, the main attraction at Roxborough are the incredible rock formations, and it is always of interest to tune in to the birds that utilize this unique habitat.  For the last several years Prairie Falcons have nested up on the highest protected rock ledges where they scape loose pebbles to form a small depression to hold their eggs.  And we got to watch a single falcon standing up high on its ledge.

Also, notable were the Violet-green Swallows and White-throated Swifts that utilize the numerous little pockets and cracks in the faces of the cliffs for their nests.  A little bit of info on swifts and swallows.  Swifts, along with Hummingbirds, belong to the order Apodiformes (“without feet” or “footless”) because their feet are so little and really only useful for perching.  Swifts superficially resemble swallows, and both groups get their groceries by foraging for flying insects.  However, swifts are faster flying, with a rapid, flickering flight reminiscent of bats, they rarely fly in a straight line – giving the impression that their wings are flapping alternately, their sickle-shaped wings are more swept back, and their “wrist” appears proportionally closer to the body.

Swallows are in the large Passeriformes order – “Perching” birds – which includes over half the birds in the world.  They have broader, shorter wings, and have a more relaxed wing-beat.  Both the species we were seeing, White-throated Swift and Violet-green Swallow, have rumps with white sides, so this can take a bit of work sorting these out.

Other birds that can, at times, have a preference for foraging on cliff faces include Northern Flickers and Say’s Phoebes, but we did not see any of this behavior this time around.

Perhaps the real highlight of the day was getting to play bird detective a bit with a pair of Cooper’s Hawks.  Being woodland hawks, often in dense foliage where visual contact may be limited, they rely on vocalizations as a primary means of communication.  We first heard a single bird making a couple of interesting sounds down in the little riparian area below our trail.  One call was the typical “cak-cak-cak,” which, once one becomes familiar with it, is fairly distinct, and provides an easy way to identify a “Coop.”  The other call, however, was not one with which I am familiar, a kind of nasal “whaaa.”  A little research indicates that this is primarily a call that females make that’s related to receiving food, or begging for food, from the male.  Digging a bit deeper I found that scientists have identified 42 different calls by females, 22 by males, and 14 by young. The larger repertoire of calls by females is attributed to their greater need to convey more information.

So, then, after a bit of looking we located our calling bird, presumably a female, in the upper branches of a cottonwood.  Shortly thereafter the male showed up, and they were alternately engaged in sitting in a nearby stick nest, presumably getting it in shape for the eventual laying of eggs. The longer we stood up on our trail, and just observed things, the more we saw and learned.  Great fun!

Hope to see you soon on another bird walk!