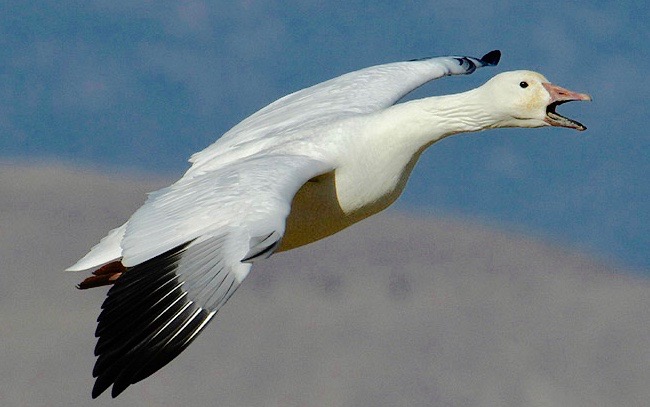 Eight of us had a productive morning birding on a gloriously nice fall day.  The waterbirds were great, with two species of geese, fourteen species of ducks, plus a couple of Pied-billed Grebes, and some American Coots. Of special note here was a single Snow Goose amidst a long, long line of Canada Geese passing overhead.  Also, we had to wrestle with the identification of a small group of Greater Scaup.  Greater Scaup are member of the genus Aythya, which also includes Lesser Scaup, Ring-necked Duck, Canvasback, and Redhead.

In Colorado Lesser Scaup are far more common than Greater, but telling the two apart presents us with a significant challenge.  Key attributes to look at are lateral head shape (rounded, not peaked with slight tuft), frontal head shape (has jowls), bill shape (large black nail on tip), and the extensiveness of the white wing-stripe on birds in flight (extends from the body to the end of the wing).  A more subtle attribute to look for has to do with the iridescent head color, Greaters are green, and Lessers are purple, BUT be mighty careful here. We all know how in certain light Mallards have green heads and other times they have purple heads.  Head color in scaup is not a reliable characteristic, but, coupled with seeing other pertinent details, it can help lead you to a proper identification.

Perhaps the bird of the day was a Black Scoter.  We are fortunate to get to see all three North American scoters in Colorado – Black, Surf, and White-winged, but these are primarily seaducks and their appearance here in the middle of the continent is relatively rare, and generally it is during fall migration that we could get lucky enough to see them.  Our bird was apparently an adult female, but first-winter juveniles, both male and female, have a very similar plumage.  Key features include a dark cap and pale cheeks on an otherwise rather plain brown, stocky duck.

One other bird of note for the day was a Northern Shrike.  We get Loggerhead Shrikes breeding in Colorado, and then in winter we’re fortunate to get Northern Shrikes.  Both are very striking birds with their dramatic mix of white, gray and black patterning.  With Northern Shrikes key features include a longer, more strongly hooked bill, and the black mask is narrower than on a Loggerhead.

All in all, a very enjoyable morning!