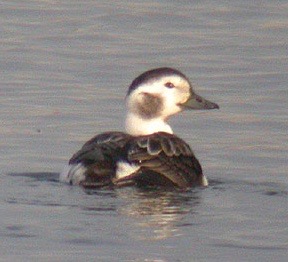 We visited two main areas this morning, South Platte Reservoir and the smaller ponds just to the east of the reservoir along the South Platte River.  The reservoir had very little action, but we did get to have excellent views of a pair of Long-tailed Ducks.  These guys were historically known as Oldsquaws, evidently because they (the males primarily, actually) tend to be far more vocal than most other ducks and can be heard for long distances.  This politically incorrect name was changed about twenty years ago, and the name from across the Atlantic for this species was adopted.

Long-tailed Ducks have several unique qualities.  One is that they dive deeper than any other duck, down to almost 200 feet.  Hence, we tend to see them when they show up in Colorado on only the largest reservoirs.  Then, unlike any other waterfowl, they have three plumages instead of the normal two. In the non-breeding season, when we see these guys here in Colorado, the male has a white forehead and crown, a black nape and sub-auricular area (below the ear), a beige patch on the side of head, a bi-colored black-pink-and black bill, and a white chin and breast. The most distinctive feature is the two long central tail feathers that stream behind. The female has a white eyeline, neck, nape, and area where bill meets face, a dark sub-auricular area (sort of like the male), and otherwise she is mostly mottled brown (see photo at the top of the blog).

One of our morning’s highlights was getting to see a flock of 28 (more or less) Western Meadowlarks in the top of a cottonwood.  We have Meadowlarks throughout the year here in Colorado, with more around in the summer than the winter.  However, these wintering birds tend to hang out together in small flocks, so when we do get to see them, we tend to see more than one bird at a time.  Our flock did seem to be unusually large, and it was interesting that they were all in the top of a tree.

Another great bird we saw was an Audubon’s race of the Yellow-rumped Warbler.  This is the western race, while the eastern race is the Myrtle.  We have both races here in the winter.  These two were considered to be separate species back in the day, but because of the degree of hybridization they were lumped together as one species.  The yellow rump is always bright yellow regardless of the time of year or the race.  Superficially, we always talk about the Audubon’s having a yellow throat and the Myrtle having a white throat but take a look in your field guide and note that the yellow throat of an Audubon’s in first-year birds can be very washed out and almost white.  A good feature to look for is whether that throat patch is restricted to the throat area (Audubon’s), or whether it wraps around back of the auricular (ear) patch (Myrtle).

I hope to see you on another walk soon!