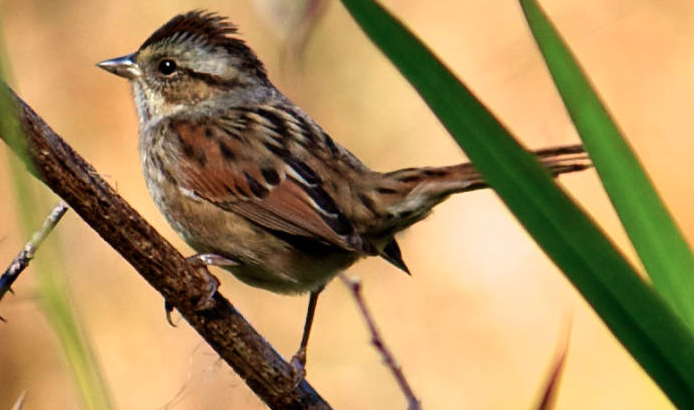 What a great morning!  A bit on the chilly side, but we saw some cool birds. We started with one of the classic bird identification conundrums.  Was our group of five scaup Lesser or Greater Scaup?  These two members of the Aythya genus are very similar in appearance and can cause no end of headaches.  There are a number of characteristics to look for, and it’s best if you can have more than one of them on which to base you ID.  Let’s begin with lateral head shape.  In Greater Scaup the head is higher towards the front of the crown and is gently rounded from crown to nape as it slopes back from that high point, the eye appears proportionally higher in the face, the bill is more massive, and the head tends to be green (but there are many warnings about not relying on head color).  When viewing the head from the front, Greater Scaup have definite “jowls” and the nail at the tip of the bill is quite wide.

Lesser Scaup have a more pointy, taller head with an obvious corner at the rear of the crown, which is also the highest point of the head; the eye is more centered in the face from top to bottom, the bill is thinner, and the head tends to be purple (but this is not always reliable).  When viewed from the front, Lessers have a narrower (less jowly) look, and the nail at the tip of the bill is just a little black spot. For more on scaup head shape check this out – https://cobirds.org/Publications/ColoradoBirds/InTheScope/21.pdf.  Two other characteristics to be aware of are the degree of whiteness in the flanks – Greaters tend to be more bright white, and the amount of white in the wings – in Greaters, this white extends through both the secondary and primary flight feathers, while the white in Lessers is confined to the secondary flight feathers. Lacking a scope on Saturday, I didn’t feel as though I was getting as good a view as I needed to make a definite identification, and therefore just put these birds down as Greater/Lesser Scaup. Incidentally, these guys were seen on Blackrock Lake which, in prior years, has been a good place to see Greater Scaup.  One more resource for you – https://www.audubon.org/news/greater-or-lesser-scaup-here-are-biggest-differences-between-two.

While at Blackrock we also got to spend some time on identifying a male and female Common Merganser.  The male is pretty straightforward with his all-white breast and belly, dark green head (which often appears black), and red-orange bill.  But let’s spend some time on the female, because we want to be able to distinguish the female Common Merganser from the superficially similar female Red-breasted Merganser. We noted on Saturday that our bird had a warm, cinnamon brown head, with slight crests at the back, and a distinct bright-white throat patch.  One other feature to look for is that the bill on a Common Merg has a wide base where it meets the head and then it tapers down to a narrow point.  The bill on a Red-breasted Merg is uniformly thin along its whole length, and while there can be some lightness of color in the throat area it’s more blended and not so distinct as with the Common Merg. Also, the Red-breasted has longer, wispier, ragged crests.

Heading over to the C-470 overpass we had a few more great birds, including Killdeer, Belted Kingfisher, and a Say’s Phoebe.  This last is really the only flycatcher that we can see in the Denver area in the winter. In southern Colorado, in the winter, you can also find Black Phoebes.  While 30-40 years ago Say’s Phoebes were considered quite rare in the winter in Colorado, we now see them with some increasing regularity, and, overall, their numbers have been on the increase.  With regard to summer populations for the US and Canada, Breeding Bird Survey data over a 45-year period indicate an estimated 40% increase.

We ended the morning with a couple of more first-rate birds at a swampy beaver pond.  Rusty Blackbirds occur rarely in the winter in eastern Colorado, primarily along the South Platte and Arkansas River drainages.  We ran into a little group of four and got great looks at one with its brownish hood and back, buffy supercilium (eyebrow), small black patch around its bright yellow eye, and slender, slightly decurved bill.  In this same area, apparently hanging out with some Song Sparrows, we had another rare winter resident, a beautiful Swamp Sparrow.  And then, in that same area we got multiple views of Wilson’s Snipe.  And then……., but that’s enough for now.

Hope to see you on another walk soon.
Chuck