Last Saturday morning, there was enough interest for two different bird walks at the Walden Ponds/ Sawhill Ponds Complex in Boulder. Both groups met at Cottonwood Marsh, but with different start times and routes. The avian highlights varied substantially between the two walks.

To start, the 8 am group noticed several male Red-winged Blackbirds displaying and singing in the cattails on the south side of the marsh. It won’t be long before we see an influx of even more males and females as spring progresses and breeding season is in full swing. 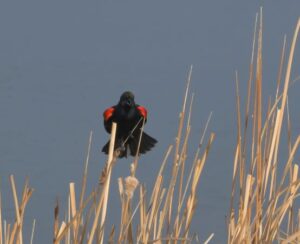 From Cottonwood Marsh, we headed to the northwest corner of Duck Pond where the group started practicing their duck ID skills. In winter, ducks showcase their fine-feathered breeding plumage so this time of year offers excellent opportunities to learn how to distinguish between common species in the area. At Duck Pond, we found Hooded Mergansers, Ring-necked Ducks, Gadwalls, American Wigeon, and Mallards. As we watched the various individuals from the same species, we noticed that members of the same species tend to move together in groups. Female ducks are harder to distinguish, but they’re often traveling with male counterparts. Those observations can help birders ID ducks on future outings.

Each pond we passed offered a different collection of waterfowl so we had several opportunities to practice telling species apart. Finding a large group of male Green-winged Teal in a large pond north of Duck Pond, the smallest dabbling duck in North America, was a highlight for everyone. Green-winged Teal are often found at shallow edges of ponds. They often walk along muddy edges, too.

By the time the second walk started at 10:15 am, the skies were clearing and it was much warmer. These conditions favored raptor activity so the focus of the second walk shifted from examining ponds to searching perches and the sky overhead.

An adult Bald Eagle perched noticeably on a tower east of Cottonwood Marsh greeted the group. This individual was likely from the pair that nests east of 75th Street. We could see the second half of the pair at the nest tree.

Instead of heading due west from Cottonwood Marsh as we did during the first walk, we headed north towards Boulder Creek. On the west side of Cottonwood Marsh, we spotted a male American Kestrel perched on a stump with his back to us. This view provided an opportunity to discuss coloration differences among the sexes of North America’s smallest falcon. Female Kestrels don’t have blue-gray wings like males. We got a second, better look at this male later in the walk. 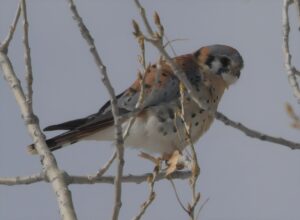 Other raptor highlights during the second walk included multiple Red-tailed Hawks, a third year Bald Eagle, and a Golden Eagle. A member of our group mentioned she was hoping to see a Golden Eagle this morning so having one fly overhead at the end was an excellent way to end our morning of birding. 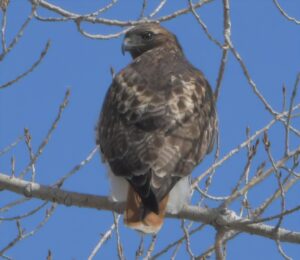 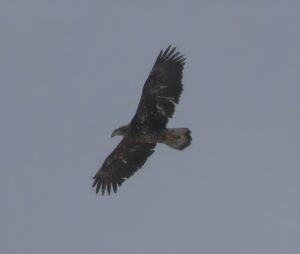 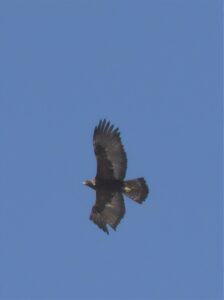 The Walden Ponds and Sawhill Ponds Complex is featured in Best Birding Hikes – Colorado’s Front Range. The Complex offers some of the best year-round birding opportunities in Boulder County. No matter the month, a birding outing here is sure to deliver. 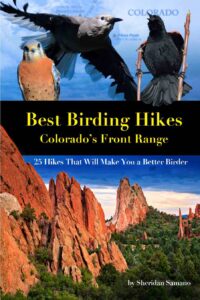