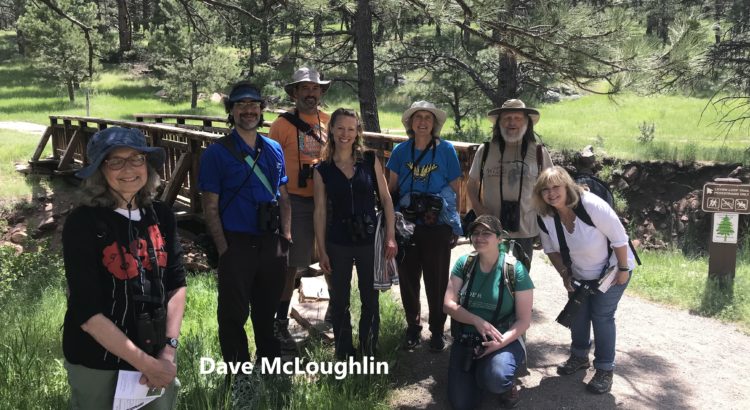 We couldn’t have asked for better weather for our trip to Heil Valley Ranch. Heil Valley Ranch is one of the jewels of the Boulder County Open Space program with over 6,000 acres of prime wildlife habitat, amazing vistas, and gorgeous wildflowers, all of which we were able to enjoy on a warm Saturday morning in June.

We first struck out on the Lichen Loop. Before we’d gotten over the bridge, we heard a Cordilleran Flycatcher calling. Cordilleran Flycatchers are small, yellowish flycatchers with large white eye rings that form a tear drop shape behind the eye. They tend to favor moist areas in coniferous forests, such as along streams, which is where we found this one. Flycatchers can be extremely difficult to tell apart, but this one helpfully says its name: “Cordi! Cordi!”

A visit to Heil Valley Ranch isn’t complete without a Wild Turkey sighting and we saw several. Most of Heil Valley Ranch is Ponderosa pine habitat and the turkeys eat the cones as well as insects and berries from bushes such as the chokecherry present in the valley.

Not only is Ponderosa pine habitat good for foothills birds like Wild Turkeys, but also for mammals like the Abert’s squirrel and mule deer, both of which we got a chance to see on our hike. The Abert’s squirrels at Heil are almost exclusively melanistic, meaning that they’re a very dark brown or black color rather than grey. Heil is also an amazing place to go butterflying or wildflower watching and we were lucky to have some experts in our group to help identify them. Painted lady and orange sulphur butterflies were especially abundant.

Once we emerged from the Lichen Loop, we walked a short distance along the Wapiti Trail where we had fantastic views of a male Broad-tailed Hummingbird flashing his pink gorget, and several Lazuli Buntings. We even got to see a pair of Lazuli Buntings mating! Quite different from the bright blue and orange of the male, the female Lazuli Bunting is a warm cinnamon brown. She’s also much shyer than her mate; rather than singing from atop an exposed perch, she tends to hide in dense bushes.

As we headed back to the parking lot, we finally got great looks at several birds we had only been able to hear deep in the trees: a male Lesser Goldfinch and a male Western Tanager. “Lesser” isn’t a value judgment; it really refers to having less yellow than our other Colorado goldfinch species, the American Goldfinch. Lesser Goldfinch males in Colorado have sooty black caps and dusky backs. When they fly, they flash large white patches on their wings. We had an unprecedented invasion of Western Tanagers in people’s yards this spring due to the cooler temperatures and late snow, but Western Tanagers typically breed up in the Ponderosa pine forests such as at Heil Valley Ranch. The males are a riot of red, yellow, and black, while females are a dingy yellow and grey.

Our trip netted us 25 bird species in all, plus an unidentified hummingbird (Broad-tailed or Black-chinned). Such a great day!