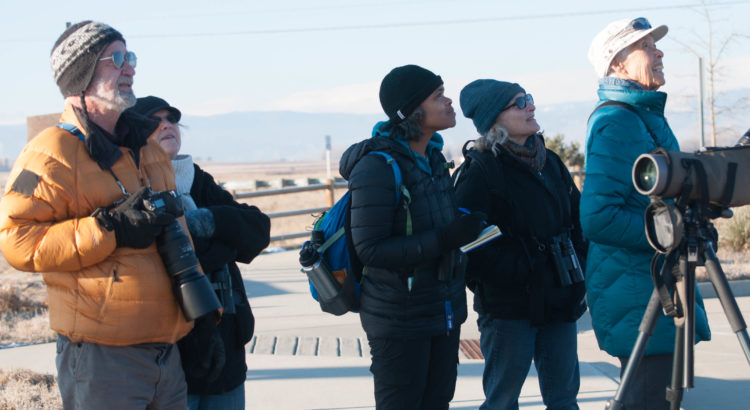 It was a cold, but clear morning when 9 intrepid birders set out for Peschel Open Space. Peschel is a hidden gem in the Weld County portion of Longmont near Sandstone Ranch. While the St. Vrain Greenway trail was heavily damaged by the devastating 2013 flood and parts of it only reopened earlier this year, the flood also created a lot of fantastic wetland habitat ideal for shorebirds and waterfowl.

Things started off on a high note with a female American Kestrel and only went up from there. At some points the sky was nearly black and the air filled with the honking of geese attracted to the river, ponds, and nearby agricultural property that Peschel has to offer. In and among the thousands of Canada/Cackling Geese, we saw a dozen Snow Geese, including several juveniles and even a “blue morph.”

Though Mallards were by far the most prevalent duck, there were also a scattering of American Wigeons, a few Green-winged Teal, and even 4 male Northern Pintails in their full glory.

In addition to American Kestrels, Red-tailed Hawks were especially prevalent. We saw 6 different Red-tails. Other raptor highlights were the resident pair of Bald Eagles that made their appearance as we were heading back to the parking lot, 2 Northern Harriers, a Great Horned Owl roosting low in a tree, and a soaring Prairie Falcon.

While songbirds were in short supply this time of year, we did see several sparrow species (Song, American Tree, and White-crowned) and heard from resident species such as the Marsh Wren, Northern Flicker, and Blue Jay. The piece de resistance, however, was the American Pipit we saw picking around in the river near the bridge leading to Sandstone Ranch.

In all, we saw a total of 35 species, pretty good for an early winter day!