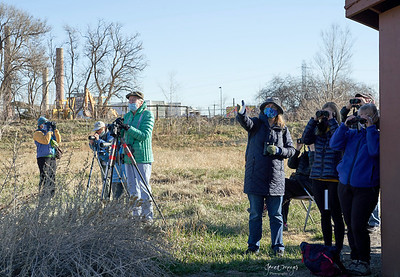 It was a beautiful morning of birdwatching and banding at Sombrero Marsh, in partnership with Thorne Nature Experience. We began by taking a short walk down to the bird blind that overlooks the marsh. In addition to the large flocks of Canada Geese, there were quite a few Green-Winged Teal, as well as Mallards and three Gadwalls. While we were watching, two Killdeer showed up on the shore and we enjoyed watching them walk on the beach.

As we headed toward Thorne’s education building, we saw two Say’s Phoebes, which was a first for some of our participants from the East coast. While walking back, we also saw a Western Meadowlark perched on a post and talked about its song. We arrived at Thorne’s educational building just as Oak Thorne was showing up to demonstrate bird banding for our group. He has been banding birds for nearly 70 years! He began when  he was 13 years old, and his high school biology teacher introduced him to it. He founded the nature education center named for him in 1954 and it has been connecting kids to the outdoors ever since.

I started attending nature-themed summer camps with Thorne Nature Experience when I was eight years old and signed up for Oak’s Beginner Bird Banding camp as soon as I was 12 years old. I immediately fell in love with bird banding and have been doing it ever since. While we were waiting for Oak to catch birds in the traps set up near the building, we watched a small flock of Tree Swallows that were conveniently posing on top of some bird houses in front of the beautiful mountain landscape.

The traps were unusually quiet at first, which seemed mysterious until one of our participants spotted a Cooper’s Hawk in the area–that explained it! The hawk moved on and, soon enough, Oak caught a male Red-Winged Blackbird in one of his traps. The traps have seeds in them and most of the time, when he isn’t banding, they are normal bird feeders, and the birds are accustomed to freely moving in and out of them. When Oak is ready to band, he activates a control panel inside the Thorne building to close the feeder and trap the birds inside.

This bird was not banded and so the group got to see an up-close demo of banding and had the opportunity to hold the bird.

One of the participants released it and we once again waited for more birds to come into the trap. While we waited, the Cooper’s Hawk from earlier flew over, as well as a Double-crested Cormorant. After a short while, Oak announced he had caught a whole flock of male Red-Winged Blackbirds. The group went around the back of the building to examine the traps and watch the process of removing birds. As we removed the birds one by one, it became clear that many of them had already been banded. This is quite common, since Oak bands at Sombrero Marsh frequently and even the recaptures provide useful data. For the birds that are already banded, Oak still records all of the information about them as sometimes we will catch a bird multiple years in a row and this provides valuable information about their lifespans. All of his data gets electronically submitted to a national database based in Laurel, Maryland.

There were a couple unbanded birds in this catch and participants got to use the special bird banding pliers and fit the small aluminum band on the bird’s leg before releasing them again.

Red-Winged Blackbirds are by far the most common birds Oak bands at the marsh, but in the summer he also gets Yellow-Headed Blackbirds, White-Crowned Sparrows, Mourning Doves, and the occasional Blue Jay or American Robin.

It was a great morning with lots of waterfowl, songbirds, and a bird banding demo with a master bird bander. We were lucky enough to have a photographer come and take lots of pictures of the whole process. A few are included in this post but you can see the whole gallery at this link. Big thank you to Janet Meyer for capturing these shots!