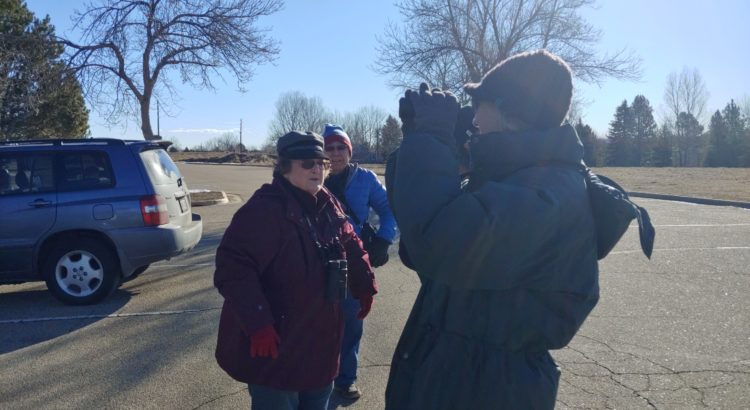 It was a beautiful, but blustery, morning when we set out for Wanaka Lake Park and Greenlee Preserve where we were joined by Lafayette resident and expert birder, Ted Floyd. The wind ended up being fortuitous because it broke up the thin skin of ice on Wanaka Lake. That meant we got to enjoy ducks and geese that would otherwise have been elsewhere, including Gadwall, Mallards, Northern Shovelers, a male Common Goldeneye, a group of Common Mergansers, and both Canada and Cackling Geese. The latter is distinguished from the former by their much smaller size, daintier bills, and stubby necks.

After surveying Waneka, Ted led us to Hecla Pond, which is a short walk from Waneka. In the late 1800’s and early 1900’s, Lafayette, CO was a big coal mining town and Waneka Lake Park used to be the site of a power plant that operated from 1907 until 1957. There are remnants of this history in the large ore boulders we passed on our walk to Hecla. We spent a few minutes admiring the lichen growing on the surface of the boulders.

Though small, Hecla Pond was no less interesting than Waneka. We were able to get good looks at a pair of Hooded Mergansers and compare them to the larger, sleeker Commons we’d seen earlier. We added American Wigeon to our list for the day there, as well as Ring-necked Duck (named for the faint, almost invisible ring around its neck rather than the much more obvious ring around its bill!).

The wind kept our numbers of songbirds down, but back at Greenlee Preserve we logged Red-winged Blackbirds, Dark-eyed Juncos, and American Robins. We even had a Cooper’s Hawk fly over us! Lafayette hosts bird walks at 1:00pm from Greenlee Preserve on the first Sunday of every month, so stop by if you’re in the area then.

Our final species count was 27: