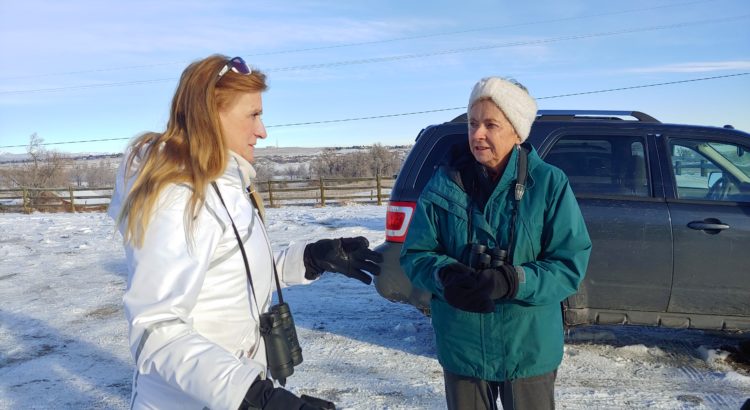 Eight birders braved the arctic temps to enjoy Teller Farms this gorgeous, February morning. Teller Farms is a working farm with a trail winding through grassland, past several ponds and under an occasional stand of trees.

While the cold meant there was no open water for ducks, limiting the number of species seen, we were able to take our time and examine common species like the Northern Flicker and the Song Sparrow. The weather didn’t deter some birds at all though. Raptors were the highlight of the day with great views of both male and female American Kestrels. One male even enjoyed his mouse breakfast just a few yards away from us! Though smaller than his mate, the male American Kestrel is brighter with slaty blue and rusty red adornments.

We also saw 2 different Red-tailed Hawks, one a light morph and one a dark morph. The Red-tailed Hawk is one of the, if not the, most variable of raptors ranging from the pale Krider’s to the almost black dark-morph Harlan’s.

An adult Bald Eagle, serenely perched in a distant tree and a Northern Harrier gliding low over the grass using its dish-shaped face to funnel the sounds of scurrying rodents to its ears, rounded out the raptor extravaganza. However, we’ll give an honorary mention to the Blue Jay mimicking a Red-tailed Hawk’s cry that had a few of us fooled momentarily!

Another special highlight came in the form of a mammal: a pair of coyotes loping across the grass. When we caught sight of them again, one had scored a meal of cottontail. It wasn’t clear whether the two were a mated pair or parent and not-quite-adult pup, but the larger coyote definitely wasn’t up for sharing its catch!

When out in nature, you never know what you’ll see! Next up: Walden Ponds on Saturday, February 16th!