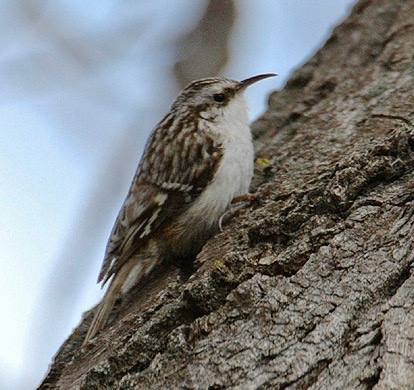 What a great morning, and great crew of folks!  Wow!  We saw so many cool birds today it’s hard to know where to start.  However, we’ll begin with the waterfowl.  Based on what we saw on Saturday it appears that some of our ducks (and Cackling Geese) may have already begun moving north out of our area.  This, however, is probably not the case as April tends to be the peak of waterfowl migration.  We’ll just have to keep an eye out and see how things progress.  Certainly, the high point of the ducks was getting to see four male Red-breasted Mergansers – one of my favorites.  The island on Tabor Lake is starting to get its spring influx of Double-crested Cormorants, and we recorded almost thirty, complete with their doofy double-crests sticking out on either side of their heads.

With regard to the raptors, we had some good ones, starting with an adult Sharp-shinned Hawk.  This smallest of our accipiters was initially observed perched in a tree where we could make out its orange breast, but the tail was hidden.  Then we got to watch it dive rapidly down amongst a small group of squawking American Robins that were totally thrown off their game. Sharp-shins are dramatically sexually dimorphic, the male being the smallest hawk in North America weighing 3-4 ounces and the female weighing 5-8 ounces.  A male Sharpie, which I believe our bird was based on its apparent size, has a wingspread of about 20-22 inches and is about 9-10 inches long.  An American Robin, therefore, is only slightly smaller than a Sharpie, the biggest difference being that a Sharpie has longer wings than a robin which can make it appear bigger.

We also got a brief look at a Merlin, our second largest falcon, zipping past us with its characteristic direct, powerful, fast flight.  Our smallest falcons are American Kestrels, which, in contrast to Merlins, have a buoyant and wandering flight style.  Finally, the last bird of the day (seen from the parking lot as I was leaving) was a Harlan’s Hawk.  This is one of the many subspecies of Red-tailed Hawk.  As with the other subspecies there are both light and dark morphs, but while for most of the subspecies, like our generic western Red-tails, the light morph is the dominant look, for Harlan’s almost 90% of them are of the dark morph variety.  Overall, what you see is a very dark bodied hawk with dark underwing coverts, the flight feathers are a light gray with black tips causing the back edge of the wing to have a black border.  Then, the tail is light gray with a smudgy darker gray terminal band.

At one point we ran into a pair of Brown Creepers, one of which was singing.  It’s a delightful little song, and really pretty unique once you become aware of it.

Finally, among our many highlights, perhaps the best of the day was getting to watch a flock of beautiful adult Cedar Waxwings sallying out and feeding on insects directly above Clear Creek. They are gorgeous birds and we got great views.