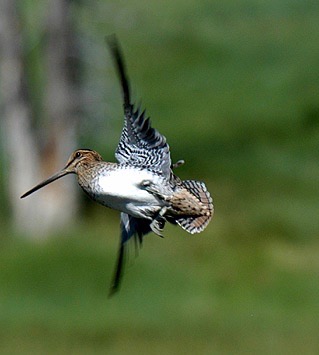 Okay, here’s the good news! Breeding season has started! Wahoo!  The probable evidence for this was seen on Saturday as we viewed a cozy pair of Great Horned Owls exhibiting some fondness for one another’s company.  Great Horned Owls can maintain their pair-bond year-round, but these two were perched so close to one another that it felt as though an even greater increased intimacy was in the air.  We also know that copulation has been observed elsewhere in Colorado as early as November (pers. com. Rob Raker), and that incubation can start in January.  December can be a great time to hear dueting males and females – the male, though about 10% smaller than the female, has the deeper hoot (listen below).  So, make sure to step outside on a brisk December night and see if you can hear anything.

So, other than owls, we had some great waterbirds.  Cackling Geese, the diminutive cousin of the Canada Goose, were in abundance.  These guys breed in the far northern Arctic and then winter throughout the southern Great Plains, including eastern Colorado. They are very similar to Canada Geese, but distinguished by their smaller size (some hardly bigger than a Mallard), relatively short neck, and stubbier bill.  This is not an easy distinction to make, and I struggle with it yearly.  We, also, had eight duck species, and spent quite a bit of time working on the finer points of duck identification.

A real highlight was getting to SEE both a Wilson’s Snipe and a pair of Virginia Rail.  Both of these species occur year-round in Colorado, though the rail, in particular, is uncommon in winter.  We saw the Wilson’s Snipe in flight, noting its twisting, zig-zag flight, and very long bill.  Only a few minutes later, we had two Virginia Rail pop out briefly from some dense cattails about eight feet in front of us, and then they were gone in an instant.  A third one was heard in a different spot. Pretty special to see both of these species on the same outing!

Finally, we had a good variety of songbirds.

Hope to see you on another walk soon!
Chuck