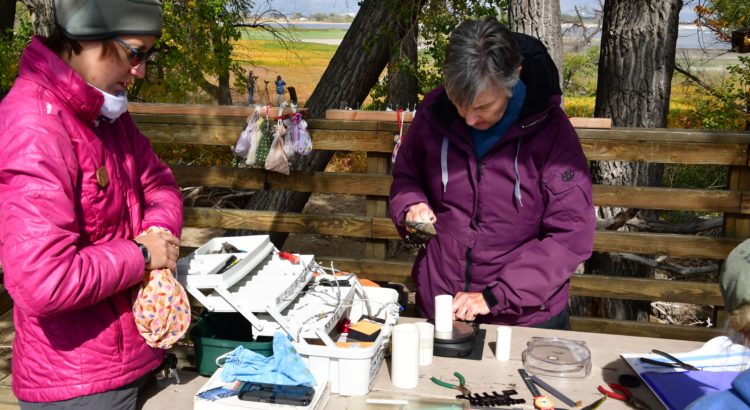 The greatest lesson of fall birding is to expect the unexpected. Yesterday’s visit to Barr Lake State Park and its banding station run by the Bird Conservancy of the Rockies is a prime example. While the weather at a glance looked like it would be poor for birding, a cold front sweeping in from the north on Friday brought with it a who’s who of fantastic migrating songbirds for our group to see on Saturday. Our lucky group of six birders were able to observe many of these birds up close and personal as they were banded and released at the station, making for an excellent morning of birding!

Bird banding is one of the most effective tools ornithologists have at their disposal to study birds. The quintessential banding operation consists of mist nets — fine mesh nets nets that are often set up in prime foraging areas — which harmlessly catch birds as they traverse an area of habitat. Researchers then collect the birds in small cloth pouches and transport them to a table with supplies for physically banding the specimens. The species, age, weight, and sex of each bird is determined and recorded before a band — a small metal ring with identifying numbers and letters — is affixed to its leg. The banded birds are then released; if they are caught at another banding station at a later date, their band can then be used to identify where else they have been caught. The entire process is harmless to the birds, although there is typically a great amount of complaining from the birds while they are being handled!

For our group, the banding station meant easier than usual views of some of Colorado’s best autumn birds. Birding during fall migration presents some challenges: most birds are not singing or vocalizing, so identifying birds by song is usually not an option; some birds are still calling, but differentiating calls between two warblers or two sparrows is a tough skill to learn. Additionally, many birds are molting into duller plumage for the winter season, so they may be hard to identify (which is especially the case with shorebirds) or even hard to locate. While we had some luck locating some warblers and sparrows as we walked from the Barr Lake nature center to the banding station, the up-close views we received while the birds were being banded were educational and incomparable.

The species most frequently caught at the banding station that morning is also the most common warbler in Colorado: the Yellow-rumped Warbler. Both subspecies, Myrtle and Audubon’s, were present; this provided a fantastic opportunity to learn their differentiating traits at very close range. Also very common at the banding station were White-crowned Sparrows, some showing mature plumage (with the unmistakable white crown) and some showing hatch-year plumage (with a rufous crown, almost resembling an adult Chipping Sparrow or American Tree Sparrow).

Two other species of warbler were also caught at the banding station: the Orange-crowned Warbler and the Wilson’s Warbler. Both species breed in the mountainous areas of Colorado, but are more commonly seen in greater Denver during their spring and fall migrations. The up-close looks at a half dozen Orange-crowned Warblers afforded us a rare look at their normally concealed orange “crown”; meanwhile, the Wilson’s Warbler that was banded at the station was still showing some very bright yellow coloration for so late in the season.

For me, the best part of the morning was getting to see a good spread of sparrows up close. Identifying sparrows is difficult year-round, especially from a normal distance; seeing them from mere inches away was a real treat. Among the species observed in the hand were Lincoln’s, Chipping, Clay-colored, Song, and of course White-crowned Sparrows. Spotted Towhees, perhaps the most vocally displeased birds handled at the station that morning, were also wonderful to observe at such close range.

One especially special bird at the banding station was a Great Crested Flycatcher, a rarity for the greater Denver area. It presented a bit of an identification challenge as it bears an uncanny similarity to its western cousin the Brown-crested Flycatcher. Another bird that was tough to identify was a Plumbeous Vireo which showed up mid-morning. Plumbeous Vireos greatly resemble Blue-headed Vireos and Cassin’s Vireos, which breed to the east and west of the Plumbeous’ range respectively; the three vireos are so similar that until recently they were considered to be one species.

And while the banding station was a fantastic highlight of the morning, our group also made a point to survey Barr Lake itself for the plethora of migrating seabirds and shorebirds that stop to feed in Colorado as they travel south. The usual American White Pelicans, Double-crested Cormorants, Ring-billed Gulls, as well as plenty of ducks and other waterfowl were present on the lake surface. A Brown Creeper and Hairy Woodpecker rounded off our list for the day which reached 47 species.

Your humble guide and scribe,