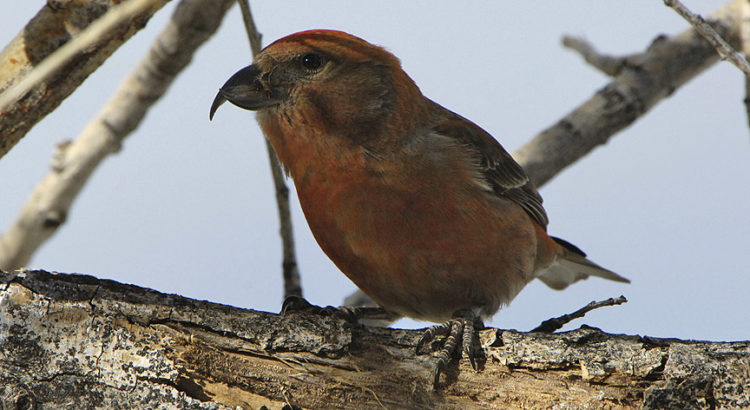 Beaver Ranch is a new location for our Front Range Birding Company bird walks.  It is located just off US 285 a bit southwest of Conifer (about 25 minutes from the store) and is operated and managed by a local non-profit in agreement with Jeffco Open Space.  It provides cabin rentals, camping sites, a disc golf course, multiple ziplines, and occasional weddings are held there.  So, it can potentially be a bit of a zoo on a summer Saturday morning. However, we are quickly learning how to find some of its quieter corners, and it has excellent habitat for birds.

Our first hot spot of the day was out in open montane grassland between a dense willow carr and a few scattered Ponderosa.  The grassy area was punctuated with some dense stands of purple-headed thistles which were proving very attractive to a beautiful male Lesser Goldfinch and a Downy Woodpecker.  It was difficult to get a good look at the Downy, which had the dark shoulders of the interior west subspecies (eastern Downys, which are the ones generally seen in Denver, have more white spotting on the shoulders).  Verification that the bird was a Downy was quickly obtained by noting the black spots on the outer tail feathers.  The very similar, but larger, Hairy Woodpecker lacks those spots.

In this same vicinity, while we were noting the Violet-green Swallows, Broad-tailed Hummingbirds, Song Sparrows, and Lincoln’s Sparrows, we saw a woodpecker fly into a nearby Ponderosa. A quick look with the binocs noted the long, white wing-patch characteristic of a sapsucker.  However, our bird was a juvenile (as were many birds on Saturday), and it took us awhile to determine that we had a Red-naped Sapsucker and not a Williamson’s.  The only red coloring noted was in the chin area, the rest of the head being rather uniformly dark with a faint white mustache stripe.  There was extensive white-and-black mottling in the back, and a patch of yellow on the belly.  We got to see none of the characteristic red, black, and white head stripes that we associate with Red-naped Sapsuckers, and we had to remind ourselves that until 1983 the Red-naped was lumped with the eastern Yellow-bellied Sapsucker as a single species, so yes it would have some yellow on its belly.  It was great getting to walk ourselves through the process of identification, and to be able to come out eventually with an ID that we felt comfortable with.

Continuing on our way we had a good time sorting through the Mountain Chickadees, all three nuthatch species, the numerous juvenile Gray-headed (Dark-eyed) Juncos with their nondescript spotted plumage, and a male Western Tanager.  We eventually wended our way to our second hotspot of the day – a coniferous riparian area with great willows along a small stream.  We just stood there and couldn’t take it all in fast enough. The prize was getting wonderful long looks at a juvenile Evening Grosbeak – appearing rather doofy – and being fed by dad.  But in the same small area we had both species of chickadees, Red-breasted and White-breasted Nuthatches, a Brown Creeper, a Yellow-rumped Warble, and a couple of Ruby-crowned Kinglets.  What fun!

So, then, we got back to our cars, thinking we were done, but in those final minutes we still got to see another Red-naped Sapsucker, a Barn Swallow, a Cliff Swallow, two Lark Sparrows, and a Brown-headed Cowbird.  A great way to round out our morning!

See you on another walk soon!