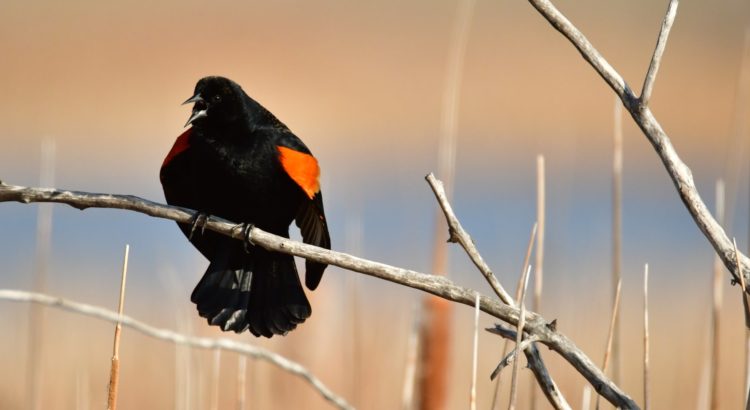 To begin with, the weather was far milder than anticipated, the sun broke through the scattered clouds, and we ended up tallying 42 species of birds.  So, it was certainly a fantastic morning for the ten of us that showed up to greet the day and the birds.

Harriman Lake continues to be a very nice local hot spot for wintering and migratory waterfowl.  Some of these were not apparent on Saturday.  We saw no Western Grebes, no geese other than Canada, or any of the three teal species, and there were no American Wigeons, Canvasbacks, Redheads, or any of the three merganser species.  However, what we did see was pretty great!  To begin with we had three members of the Aythya genus: Ring-necked Duck, Lesser Scaup, and the more uncommon Greater Scaup.  In one of the early field books for Colorado birders Harold Holt and James Lane (first published, I believe, in 1987), instead of using terms such as “abundant” and “rare,” used expressions like “Hard to miss” or “May see.”  For Greater Scaup they said, “Lucky to find,” and we certainly counted ourselves as “lucky.”

We had high numbers for Buffleheads (90) and Ruddy Ducks (45), earning us on eBird what I’ve come to call “the dreaded black box.”  If you use the eBird app to enter your bird lists you may know whereof I speak.  The black box appears whenever you record a species that’s unanticipated for your location, or if you enter a number in excess of what eBird thinks is reasonable for your location.  eBird then asks that you justify your sighting in some way, e.g. a good written description or a photograph of what you saw.  Justifying these dramatic changes in numbers can be particularly tricky during migration when good sized flocks can be present one day and gone the next.

A couple of other great sightings included fifteen Pied-billed Grebes and an Eared Grebe.  The Pied-bills seem to have a real affinity for Harriman, possibly based on the apparently abundant crayfish population, and they can be seen here year-round.  We often see the Pied-bills with full beaks trying to decide whether to eat a crayfish head first or tail first.  In contrast, the window for seeing Eared Grebes in Colorado in the spring is rather narrow (roughly late March through late May), so this was another lucky find.

We did pretty well with the raptors, even though we came away without having seen a Red-tailed Hawk.  However, a Northern Harrier, two Coopers Hawks, and, what was a first of the season bird for all of us, a Swainson’s Hawk made up for the Red-tail deficiency.

Additional highlights included a single Wilson’s Snipe, a beautiful male Audubon’s Warbler in full regalia, a small flock of migratory Lincoln’s Sparrows sticking to the lowlands for the time being, but heading up to breed in the montane willows eventually, and a large number of Tree Swallows coursing back and forth over the lake and grabbing insects from the water’s surface.  By the way, the Eared Grebe seemed to be taking advantage of this same food resource, whatever it was.

Finally, we wrapped up our morning with a Great Horned Owl mom sitting in her nest with two fuzzy nestlings.  All in all, another great morning bird-watching.

Hope to see you on another walk soon or at the FRBC open house on May 12 (we’re offering four different bird walks that morning)!