Saturday was a wonderfully mild morning for August, and six of us had a great time strolling through the peaceful environs of Hudson Gardens and along the South Platte.  The male Mallards were all clearly still in eclipse plumage – that time of year when male plumage is very like female – and the only way to tell who were the boys, and who were the girls was to look at the bill color – males = yellow-green and females = orange with black splotchiness.  The only other ducks we saw were a family group of a female Wood Duck with four juveniles.  These youngsters had not quite attained adult size and their bills were slightly smaller than mom’s. 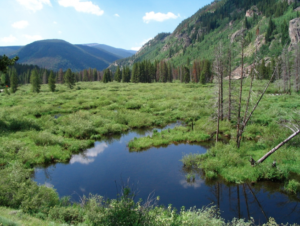 Before getting into the highlights of the morning, we need to discuss one of our montane habitats a little bit.  A “carr” is a wet woodland or shrub area, generally dominated by willows, alders, and birches, and is often in an intermediate successional stage as a beaver pond transitions ultimately to becoming a montane meadow.  Often that intermediate stage is characteristically a saturated area of willows.  These willow carrs occur in Colorado’s mountains from about 8000 feet up to timberline at about 11,500 feet.  Got the picture?  So, with regard to birds, these willow carrs are prime breeding habitat for Fox Sparrows, Song Sparrows, Lincoln’s Sparrows, White-crowned Sparrows, and Wilson’s Warblers.

The point of all this habitat stuff is that you don’t necessarily need to go up to the mountains in order to see these species – just come to Hudson Gardens during fall migration. And, one of our highlights on Saturday was a beautiful Wilson’s Warbler.  Each fall migration these guys move down out of the mountains and can commonly be seen for a few weeks in the Denver area.

Another highlight of the morning was the large number of Cedar Waxwings.  Most of these birds were juveniles and we even got to see an adult feeding its fledgling.  We also got to watch a group of waxwings gleaning insects out of a large spider web.

The birds of the morning, however, were the Cooper’s Hawks.  We got to have great looks at four individuals and had the opportunity to really break down all the physical features to look for in discerning Cooper’s from its very similar congener the Sharp-shinned Hawk, as well as telling juvenile and first-year Cooper’s from adults.  It was quite the seminar!  I’m not going to reiterate all those features here, but I will tell you that over the past five years the grove of cottonwoods just downstream from Nixon’s Coffee House has been a pretty reliable place in which to locate Cooper’s Hawks and they have had nests in there at least three of those five years.

Fall migration is happening, so I hope you’re able to pick up on a few species that you haven’t seen all summer.