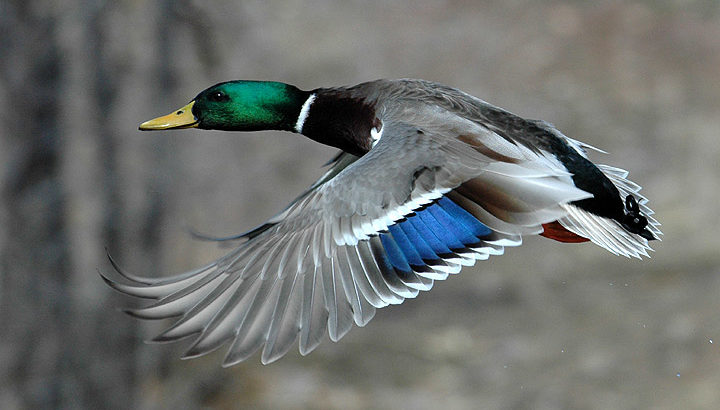 We had a raucous start as music blared across the parking lots at Hudson Gardens in anticipation of the Frosty’s Frozen 5 and 10 mile races.  Fortunately, we were ahead of the nine o’clock start time, and got out along the South Platte trail before the runners came by, and then safely sequestered ourselves well away from the action at the appropriate moments – all done very serendipitously.

So, to begin with, though the temperature was only about 30 degrees, it seemed to feel much colder, and we initially had only a few landbirds, an American Robin and some House Finches, but then as we got over to the river things picked up significantly.  The middle of the river was packed with Cackling Geese with their heads tucked away.  There were at least 600, possibly as many as 800.  Over the next forty minutes or so they gradually began to untuck, but they were in no hurry to leave.

Distinguishing Cackling Geese from Canada Geese is one of the great birding challenges.  Up until 2004 they were considered one species, and it’s easy to see why – they look VERY similar.  As with so many bird taxonomy questions, genetic analysis has led to this reclassification.  Generally speaking, Canada Geese are bigger, and Cackling Geese are smaller, but this all gets complicated by the fact that there are roughly seven subspecies of Canada Geese and four of Cackling Geese, all of which are of variable size and with some overlap between groups.  So, not to prolong this any further, a good place to start in distinguishing Cackling Geese is to look for a stubbier, shorter bill rising into a steeper forehead; the head itself is small and squarish; the neck is proportionally shorter and thicker, and some of these guys are only slightly bigger than a Mallard.  Canada Geese have longer bills rising gradually into a sloping forehead, giving the head a more rounded look; the neck is proportionally longer and thinner, with a tendency to be more “S” shaped.  Finally, we have Canada Geese year-round in Colorado, and Cackling Geese breed in northern Alaska and Canada and are only here in the winter.  ‘Nuff said!

Being right beside the Platte we also had ample opportunity to become experts at distinguishing male and female ducks of several species, both dabblers and divers.  One of the interesting winter phenomena in the Denver area is that as we get really cold weather the lakes and ponds can start to freeze over and the ducks then become more congregated along the flowing rivers and streams.  We generally see more dabblers along the river, e.g. Gadwall, Mallard, and Green-winged Teal, but with the colder weather the divers tend to show up more, e.g. Ring-necked Duck, Bufflehead, Common Goldeneye, and Hooded Merganser. With regard to diet the dabblers are primarily vegetarians, with only a small portion of their diet coming from various insect larvae.  Among the divers, about a fourth of the Ring-necked Duck’s diet is animal based (insects, nymphs, beetles, and mollusks).  Animal food constitutes the majority of the diet of Common Goldeneye, Bufflehead, and Hooded Mergansers.

Other highlights of the morning included an intermediate morph Red-tailed Hawk, which we picked up on flying away from us, but then it accommodatingly flew back towards us and landed right above us on a utility pole.  The majority of our Red-tail Hawks tend to be “light morphs,” that is they are pale in the breast and undertail coverts with a streaked belly band.  Roughly ten percent of Red-tails, however, are either “dark morph” birds that are all dark chocolate brown, or “intermediate or rufous morph” birds that are reddish-brown on the chest with a dark belly.  During breeding season in recent years there has been a breeding pair near Hudson Gardens of a light morph individual with an intermediate morph bird.  It seems likely to me that our bird on Saturday may have been the same one that breeds in this area.

Besides getting great looks at a number of songbirds such as Black-capped Chickadee, American Goldfinch, Dark-eyed Junco, Song Sparrow, and Spotted Towhee, one of our more interesting observations was of an all-male flock of Red-winged Blackbirds.  They were mostly first-year males just starting get their red epaulets, but also some beautiful adult males sporting wonderfully colorful bright red and yellow epaulets. But, no females.  Red-wings sexually segregate during migration but I’m puzzled by this mid-winter “all boys club.”

A great morning with a great group of enthusiastic birders!  Hope you can make it to the next Hudson Gardens walk or one of the other Front Range Birding Company outings!