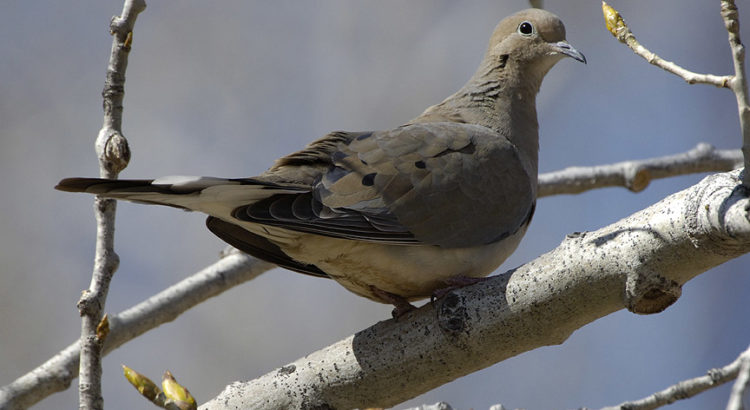 So one of the first things to happen Saturday morning was that a Great Blue Heron flew in and landed in the branches of a cottonwood tree right beside us just as we were being surrounded by a family of loquacious Black-capped Chickadees.  And, then, we got to our first pond and got to see a beautiful adult Black-crowned Night-Heron with four juvenile Wood Ducks right beside it. It turns out that Tom Bush, owner of the Front Range Birding Company, later that same day saw six juvenile Wood Ducks hanging out with mom Wood Duck right in the same area.

The South Platte was moving along at a good clip, and the only waterfowl were a smattering of Mallards.  The males are totally in their eclipse plumage and best identified by their yellowish bill, as opposed to the female’s orange and black bill.  Song Sparrows along the river were singing in a number of places.

Moving to the west side of the river we got to hear the ongoing screechy begging call of a nestling, (or juvenile) Red-tailed Hawk, and we saw one adult perched on a powerline pole.  Remember that the adult has the “red” (actually rust-colored) tail, and juveniles have dark and light banded tails with no red. In the same area we had a good sized flock of Chipping Sparrows, evidently prepping for the voyage south.

So, what didn’t we see?  The sixty or so Cliff Swallows of a month ago were entirely gone from the Bowles Avenue bridge, as, for the most part, were the ubiquitous Yellow Warblers from all the cottonwoods in the area. We encountered no nuthatches, and only one Bullock’s Oriole.  There were no gulls flying by overhead, and no crows.  So, as we can expect with birds, nothing stays the same for very long.