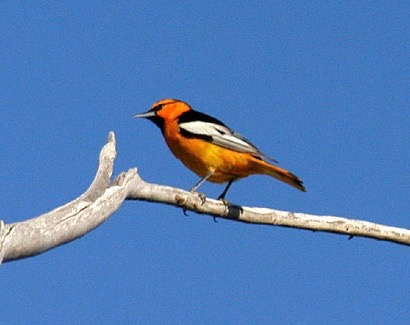 What a great group of enthusiastic birders we had on Saturday morning, and there was a lot to be enthusiastic about!  For starters, as in prior years at Hudson Gardens, we once again had a mom Wood Duck with her flotilla of seven ducklings cruising around with her.  The only role the male seems to play when it comes to nesting is perhaps helping the female choose a cavity in which to lay her eggs. Beyond that the female does all the incubating, which takes about fourteen days.  The hatchlings, when they emerge, are covered with down, their eyes are open, and they require little else from mom (the ecological term for this type of self-sufficient youngster is “precocial”).  There is a residual yolk reserve that helps them initially, but they are very quickly on their own.  You may have seen videos of these stalwart daredevils leaping out of a cavity entrance into whatever lies below – here’s one to check out – http://www.swxrightnow.com/blogs/outdoors/2016/may/21/wood-duck-follow-mom-giant-leap-faith/.  The ducklings can scatter quite widely when feeding on various invertebrates and they seem more independent than the youngsters of other duck species.  We witnessed this on Saturday, watching the little ones cruising around and feeding with no initial evidence of mom at all.

Additional highlights included a few single birds as the only representative of their species.  We had one each of American White Pelican, Snowy Egret, Swainson’s Hawk, Belted Kingfisher, Say’s Phoebe, White-breasted Nuthatch, and Gray Catbird.  One other individual was of considerable interest.  We know that Downy Woodpeckers, with regard to appearance in the vicinity of the Front Range of Colorado can generally exhibit two different looks.  There is an eastern Downy of the Great Plains and eastern forests with more white in its wings and shoulders, and there is a western Downy with mostly black shoulders and less white in the wings.  These subspecies meet and often hybridize where the plains meet the mountains, and they can have intermediate plumages.  One further difference to look for is that Downys have sexual dimorphism, that is the males and females don’t look alike – the primary difference being that male has a bright red patch on its nape.  Now, back to Saturday.  The individual Downy that we saw had a red patch on the TOP of its head. How do explain that?  It was a juvenile, and both sexes get that red patch on top of the head for a brief time.

One other interesting observation was that the Cliff Swallows were in good abundance at their nests on the Bowles Avenue bridge.  This location has been used frequently, but perhaps not every year – the presence of ectoparasites from a prior year is one of several factors that may make a site not viable.  Last year in particular I did not notice any nesting there.  It’s a complex game when it comes to how Cliff Swallows choose their nest site.  Birds choose a colony site first, a process which may entail a collective decision-making process and involve birds visiting numerous likely colony locations.  Then it may take several additional days for a nest site to be chosen within the colony.

Finally, for those of you who have come on our Hudson Gardens bird walks in the past, you may recall the pair of Red-tailed Hawks that often perch conspicuously on top of the powerline poles on the west side of the Platte.  Well, they are there again, or at least there is a pair in the same location.

I hope you can make it to a future Hudson Gardens walk, and don’t forget that you can also come on one of the free first-Saturday-of-the-month Front Range Birding Company bird walks by calling the Littleton store to register (303-979-2473).