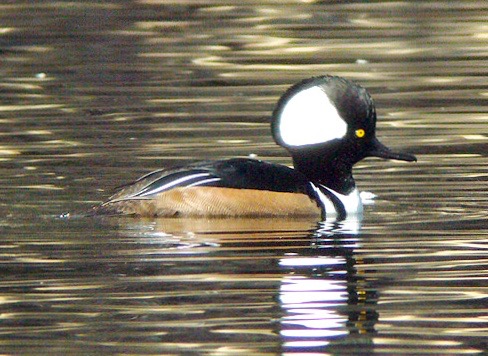 While I’ve been telling you guys that the number of duck species will increase dramatically as we get into winter, we only had four species on this morning’s walk.  While some male ducks, e.g. Northern Shoveler, are still emerging from their eclipse plumage, the four species we saw looked all spruced up and ready for breeding season, and we even saw some initial courtship behavior – head bobbing, pairs moving around together, male competitive behavior.  One of the highlights was getting to note the glossy green and purple on the heads of the male Buffleheads, and we even noted the bubblegum-pink feet as one came skating into a landing on the river.

Yet another highlight was getting to observe a juvenile Northern Harrier migrating through the area.  Harriers have long, banded tails and long slender wings, and we generally think of them as flying or gliding buoyantly low over fields and wetlands with wings held in an obvious dihedral.  Often the defining characteristic is the bright white rump. These guys are strongly sexually dimorphic, that is the male and female have very distinct plumages from one another. Males are gray above, mostly white below, with two striking patches of black on the tips of the secondaries and the tips of the primaries – the ends of the wings looking as though they were dipped in black ink.  FYI The secondaries and primaries are the flight feathers of the wing (also known as remiges), the secondaries being smaller and closer to the body and the primaries being the larger feathers farther out.  Female Harriers are brown above and buffy with brown streaks below – very different looking from the males.  Juveniles are similar to adult females but have a darker chocolate brown back and are strongly rufous below, especially in the fall.  So, we got good looks at the rufous underside of our bird as it was moving high over our heads (not low over a marsh), and this is the behavior of a migrating Harrier.

We had a slew of good landbirds including several subspecies of the Dark-eyed Junco, good numbers of American Goldfinch, a few American Tree Sparrows and Song Sparrows, a single juvenile White-crowned Sparrow, and two species of nuthatches – Red-breasted and White-breasted.  Perhaps the best of all of these was a single Ruby-crowned Kinglet.  No, we didn’t get to see the ruby crown, but we got great looks, noting that this bird is only 4.25” long – a full inch shorter than all the Black-capped Chickadees that were flitting around, and at 0.23 oz (6 g), it weighs about 40% less than a Black-cap.  These tiny, resilient birds breed in boreal forests of northern Canada and throughout the mountains of western North America.  They are common in the mountains of Colorado during the summer. In winter a few are still to be found uncommonly in the foothills and out on the eastern plains.  They have a yellowish-green wash overall, two bright white wing-bars, have a characteristic rapidly moving foraging behavior, and a “broken,” white eye-ring.  We got to see it all!